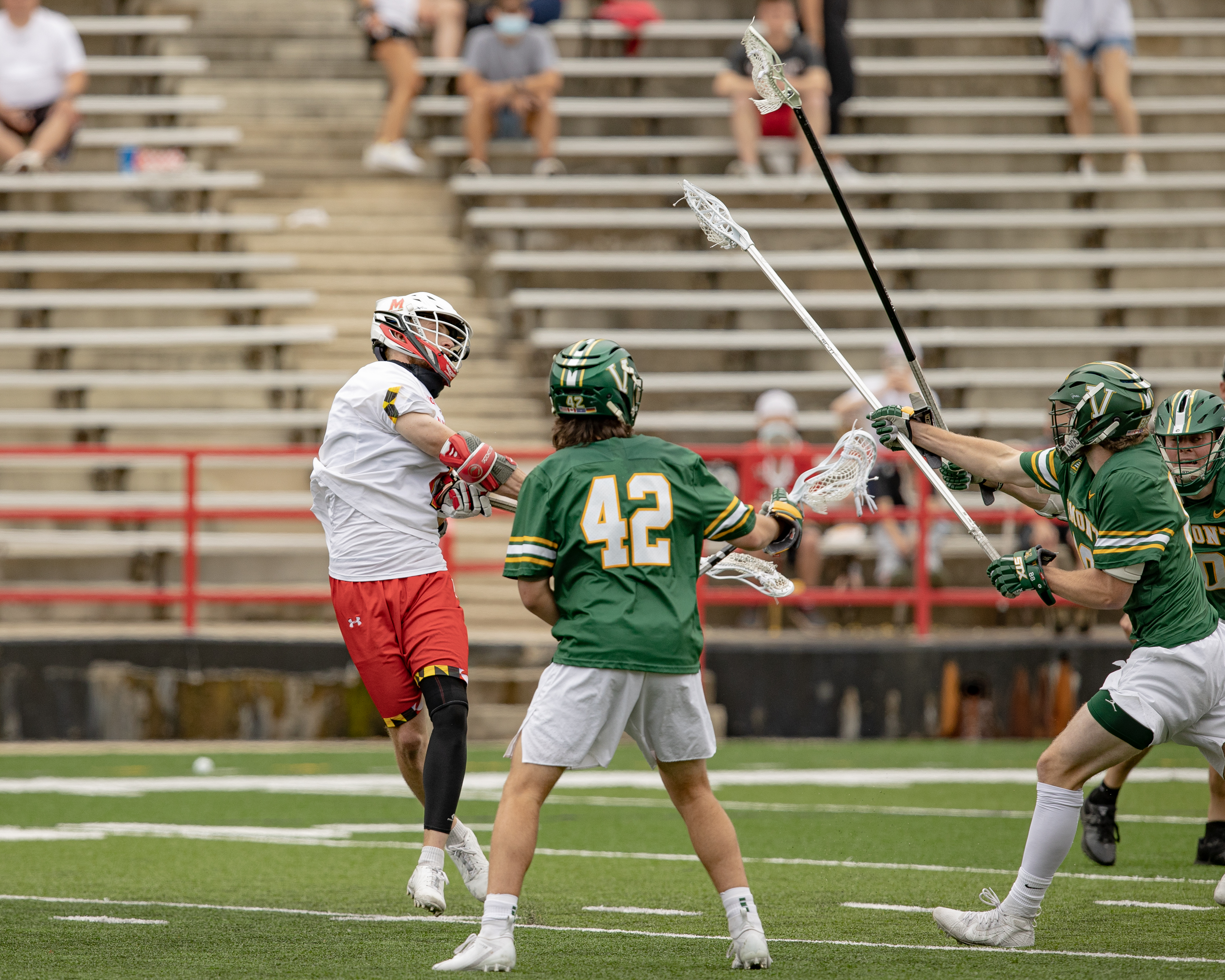 COLLEGE PARK – Ranked as the top team in the nation, the Maryland men’s lacrosse team entered Sunday’s NCAA tournament first-round matchup against Vermont with something to prove. Despite qualifying for their 18th straight tournament appearance and collecting both Big Ten Conference titles this season, the Terrapins were given the No. 3 seed.

Against the Catamounts, Maryland found enough ways to score to earn a 17-11 victory at home in Maryland Stadium to remain undefeated.

With the win, Maryland advances to the quarterfinals to take on No. 6 seed Notre Dame in South Bend, Indiana, next Sunday.

Once again, Maryland senior Jared Bernhardt played outstanding, as he scored the opening goal – his first of six goals – before the game turned into a back-and-forth affair.

Later on, with the game tied at two goals apiece, the Terrapins fired off a five-goal run, with Bernhardt and junior Joshua Coffman adding tallies late in the first quarter. Bernhardt fired two shots into the net for his hat trick while Coffman made a nasty snipe.

“Towards the end of the first, we really found a good rhythm,” said Maryland head coach John Tillman. “Jared kind of got going, and for a while there, we had a great flow.”

Early in the second quarter, junior Kyle Long rushed into a spin move towards the net before burying in the goal as he fell. Moments later, sophomore Daniel Maltz fired a laser into the net as the Terps led 7-2 with less than 11 minutes remaining.

“I kind of felt like I was running at an angle and kind of in a spot where if you just keep running, maybe try to do that,” said Long. “I felt pretty comfortable, and it got to a good spot.”

Vermont (9-5) scored two of the final three goals before halftime and added one more at the start of the third quarter to bring the visitors back within three. However, Bernhardt, a Tewaaraton Award favorite, added his fifth goal of the game as part of three straight scores by Maryland.

Long added two tallies in the fourth quarter to complete his own hat trick, while Griffin Brown scored two more times for the Terrapins.

Bernhardt ended his day with 4:39 remaining with a rocket shot through three defenders for his sixth goal of the game. Bernhardt’s six goals became the second-most scored by a Terp in a single NCAA tournament game.

With an eight-goal deficit with under two minutes to go, the Catamounts attempted a late rally, scoring three goals in the game’s final two minutes. However, Maryland staved off the late comeback for their 13th straight victory of the year.

“We’re just trying to dictate tempo,” said Maryland junior John Geppert. “Play our game, play Maryland lacrosse, and when you look back at the tape, it really comes down to defense, chasing people down, and making them feel uncomfortable.”