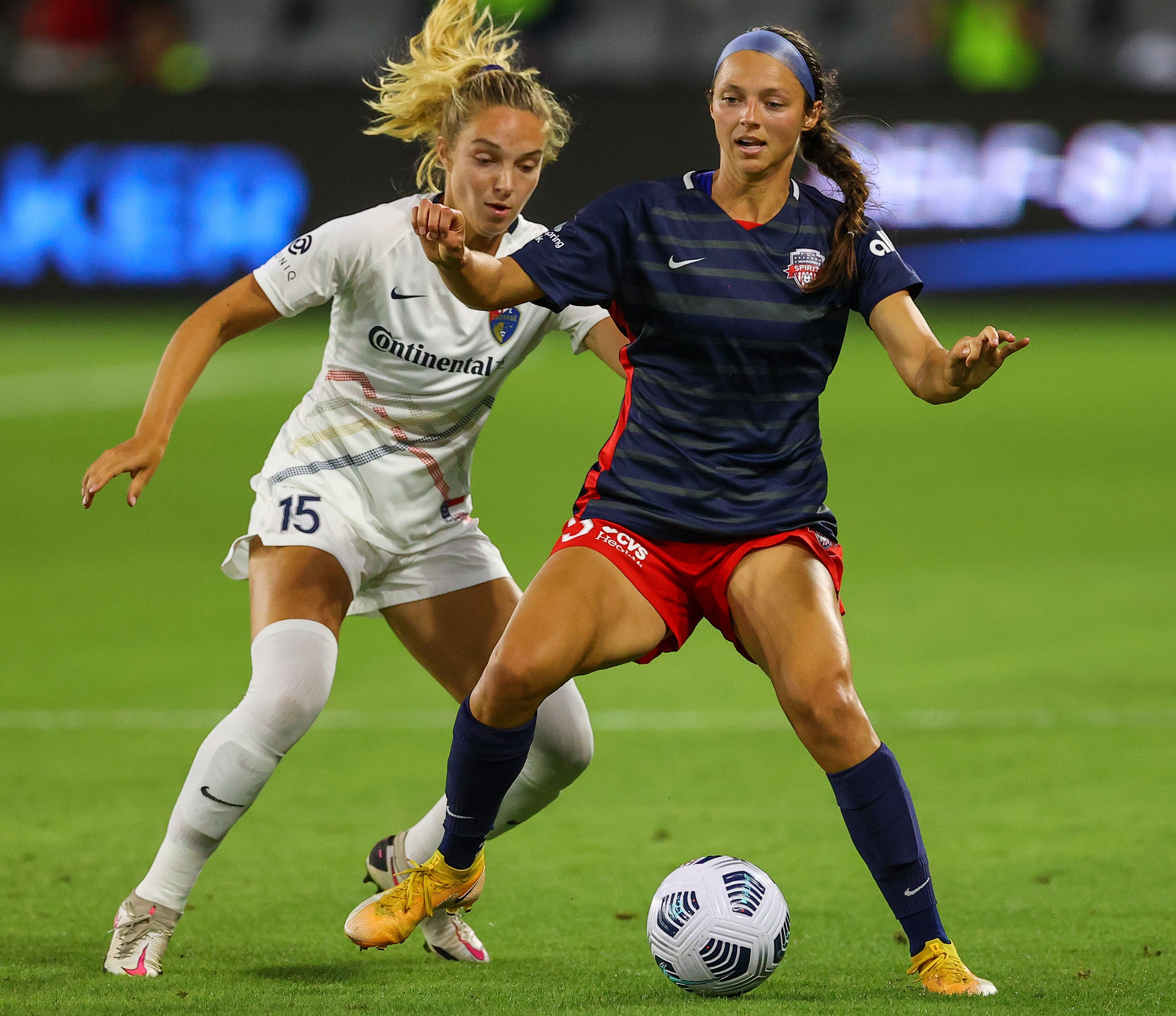 WASHINGTON – After a disappointing performance in their second home opener at Segra Field, the Washington Spirt bounced back with a 2-0 victory against the North Carolina Courage in front of 4,929 fans at Audi Field in D.C. Saturday night.

The win rose the Spirit (4-2-3, 15 points) up to fourth place in the NWSL standings, one point behind a three-team tie for first.

Ashley Hatch stood out for Washington, scoring a brace before the end of the first half. Her first goal came in the 11th minute after Tegan McGrady found her wide-open and sent in a floating cross for the early score.

She picked up her second goal seconds before halftime. Andi Sullivan intercepted a pass in midfield and sprinted through the heart of the Courage’s defense.

Facing a 2-on-2 situation, Sullivan hit a through ball to Hatch, who eluded Abby Erceg before sending a one-timer past goalkeeper Casey Murphey for her fifth goal of the season.

“Andi has been picking off those balls in the midfield quite a bit lately, so she’s been really good at that,” said Hatch. “Once she picked that one off and I saw that it was 2 v. 2, I knew that all I had to do is run with her.”

Hatch tied Sydney Leroux of the Orlando Pride and the Courage’s Lynn Williams for the league’s leading goalscorer.

“She runs as much as a midfielder … Couldn’t be happier that she is top of the goal charts.” Spirit head coach Richie Burke said.

Burke and Courage head coach Paul Riley got into a shouting match with referee Matthew Franz in the 35th minute before arguing with each other. After a couple of minutes, both coaches received a yellow card.

North Carolina (5-3-1, 16 points) had a chance to tie the game before Hatch’s second goal as a Jessica McDonald cross found Erceg in the penalty area. However, Washington’s Aubrey Bledsoe cleared out the opportunity for a corner kick. In the ensuing set piece, Erceg almost equalized again, but the shot hit the crossbar.

Washington attempted to add more goals in the second half, including a late free kick by Ashley Sanchez, but Murphy made the last-second save.

“I think we went out there, and we’re like, ‘Oh, we’re going win this. We don’t care if it’s North Carolina,'” Sanchez said. “We had something to prove because we’ve always kind of been one of the underdog clubs, and I think we got there with a lot of confidence, and we got the win.”

Washington takes on NJ/NY Gotham FC at Segra Field next Sunday at 5 p.m.