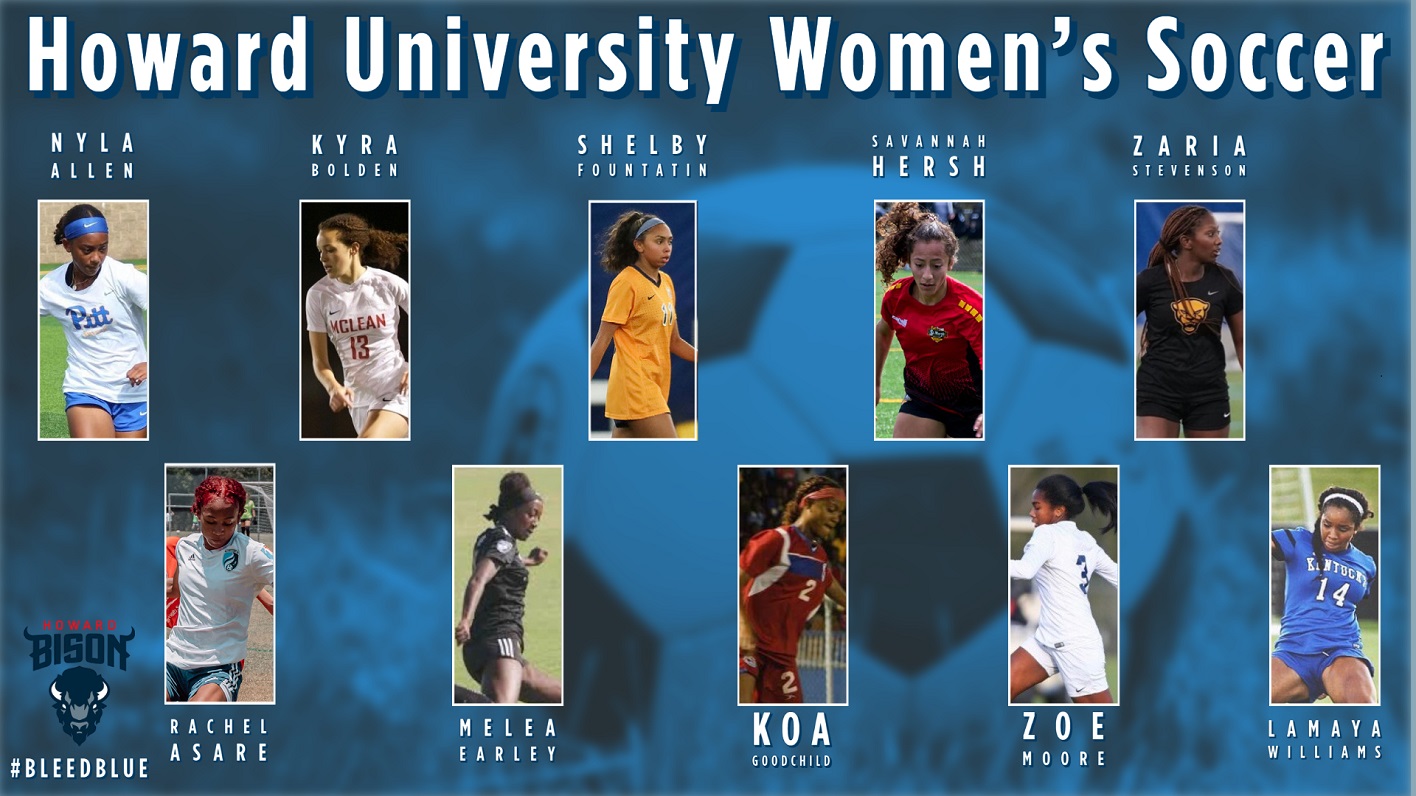 “We are very excited about our incoming class,” said Howard women’s soccer head coach Brent Leiba. “This class brings a wealth of talent, versatility, athleticism and experience. In addition to our returning players, it allows us to have an exceptional competitive environment and an immediate opportunity to compete as we transition into the NEC [Northeast Conference]. We are looking forward to this upcoming year.”

In fall 2021, Coach Leiba and the Bison return to the field after more than a year away due to COVID-19.

Here is more information on the 10 newcomers:

Allen arrives to Howard after one year at Pitt. In high school, she played for the U17 Jamaican National Team while attending the U.S. Soccer National Training Centers (2014-2017).

The political science major chose Howard because of its location, academic reputation and the women’s soccer program.

Asare hails from the Sunshine State where she was a three-year captain at Spoto H.S. (Riverview, Fla.). She was the top scorer in the conference while making the all-star team. The Florida native also competed in track and graduated in the top 20-percent of her senior class.

The elementary education major selected The Mecca because of its HBCU culture.

Bolden comes to The Hilltop after winning multiple Elite Clubs National League (ECNL) titles (2019-2021). In her high school career, she won numerous individual accolades, including Conference Player of the Year and Regional Player of the Year.

She chose HU because of its HBCU culture, location and prestigious academic reputation.

Earley brings her talents to Howard after being a three-year captain at La Serna H.S. (Whittier, Calif.). During her time, she won Offensive Player of the Year (2018-21) and a pair of All-League First Team honors (2019-20).

She selected Howard because of its academic excellence and HBCU culture. In the fall, Early will study environmental studies.

Fountain played two seasons for Marquette before transferring to The Mecca. In high school, she was a two-sport student-athlete in soccer and track.

The DMV native plans to study political science and chose Howard because of its location and proud alum tradition.

Goodchild arrives to HU after playing on the Bermuda National Team (U15, U17 & U20) where she helped the team win the Concacaf Championship. The team captain guided the club in the World Cup qualifiers.

She selected Howard because of its HBCU culture, prestigious reputation and networking opportunities.

Hersh arrives to Howard after being named to the Eastern Regional Team twice (2018 & 2019) at Huntingtown H.S. The Maryland native selected HU because of its endless opportunities and prestigious reputation.

In the fall, she plans to study political science.

Moore comes to The Mecca after playing three seasons (2017-19) for the Olympic Development Program Florida Team. In high school, she was named 2020-21 Scholar Athlete of the Year at Academy at the Lakes (Land O’ Lakes, Fla.).

Stevenson hails from the Lone Star State after playing one season at Pitt, alongside Nyla Allen. In 2017, she helped FC Dallas win the ECNL National Championship and a pair of Texas Conference Championships.

She selected HU because of its HBCU culture and plans to study psychology in the fall.

Williams comes to The Hilltop after being a two-year member of the Kentucky Wildcats program. Before arriving in Lexington, the Arizona native won back-to-back state titles (2014 & 2015), along with a National League Championship (2015).