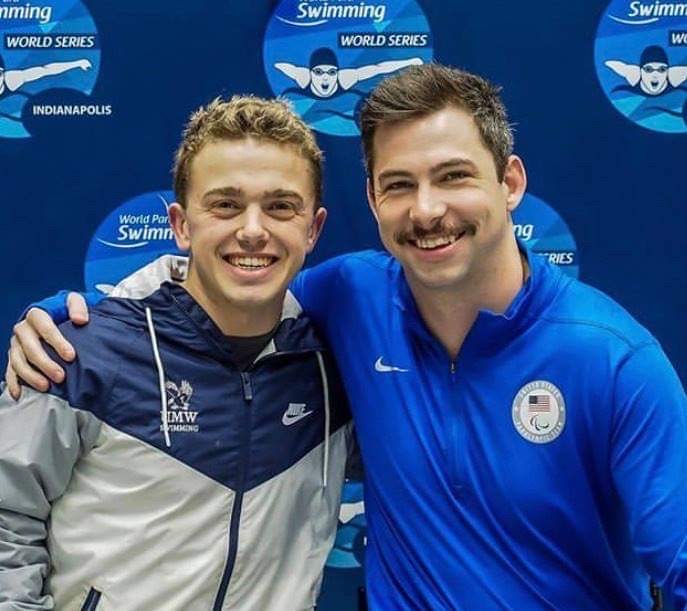 When Zach Shattuck heard that he would compete on Team USA’s Swim Team at the 2021 Tokyo Paralympics, he felt grateful.

“It’s amazing,” said Shattuck. “To have started at Frostburg [State University] and gotten my roots there in swimming, and gotten my feet off the ground, and then to have made this goal, which has been something from the beginning, was to make the Paralympic team, and to have accomplished that is a really cool feeling.”

Shattuck, 25, is a Mount Airy, Maryland native with dwarfism, who began swimming as a freshman at Frostburg in 2014.

“Frostburg’s experience made me who I was as a swimmer,” said Shattuck. “Coach Justin Anderson was kind enough to give me a spot on the Frostburg roster where I came in as a freshman, and him, Jimmy Martin, and Becky Yost taught me how to swim.”

During the first month of his swimming career, Shattuck was taught how to flip-turn, do the strokes properly, and as his technique got better over four years, it also led to his first trial experience as a sophomore in Rio.

Before competing in the Tokyo Paralympics, Shattuck competed in the 2015 Pan Am Games, the 2017 World Championships, and the 2019 Pan Am Games.

“Those experiences were awesome,” said Shattuck. “Any time you get to travel do a different country, and then go compete, and wear the flag on your cap is truly an honor.”

But Shattuck is also proud to represent his hometown of Mount Airy, as he has friends and family in his neighborhood where he grew up, attending South Carroll High School in Sykesville.

“We were outside playing every day,” said Shattuck. “To be able to represent them, my high school, and all those teachers and coaches that I had growing up that pushed me and always wanted me to work hard and be the best that I could, I wouldn’t be here without those guys.”

Back in June, Shattuck competed in the U.S. Paralympic Team Trials in Minneapolis, where he set an American team record during the morning preliminaries in the SB6 100-meter breaststroke with a time of 1 minute, 23.76 seconds before winning the final. He also set an American record in the S6 50-meter butterfly with a time of 33.33 seconds.

“A couple of those records I already had,” said Shattuck. “I went faster and rebroke my own, but a couple of them I hadn’t had before. To be able to swim faster than some previously accomplished swimmers is a huge honor, and obviously, anytime you can drop a best time, it’s a pretty cool feeling.”

After graduating from FSU in 2018, Shattuck was the assistant coach for the swim team at the University of Mary Washington, where fellow swimmer Joey Peppersack attended. He will also be competing in the Paralympics.

“That was a really cool experience,” he said. “Because you got to see life from the other side. I had spent my whole career as a swimmer, hadn’t done any coaching. To have that opportunity to work with other para-athletes and Joey Peppersack, you got to see all these kids grow and prove as swimmers and as people.”

Maryland has been known for breeding talented athletes and swimmers, such as Michael Phelps and Katie Ledecky, and Shattuck is quite aware of that fact.

“There’s definitely something in the water in Maryland,” said Shattuck. “I think to be included in that list is an absolute honor, and I hope to represent Maryland as best as I can.”