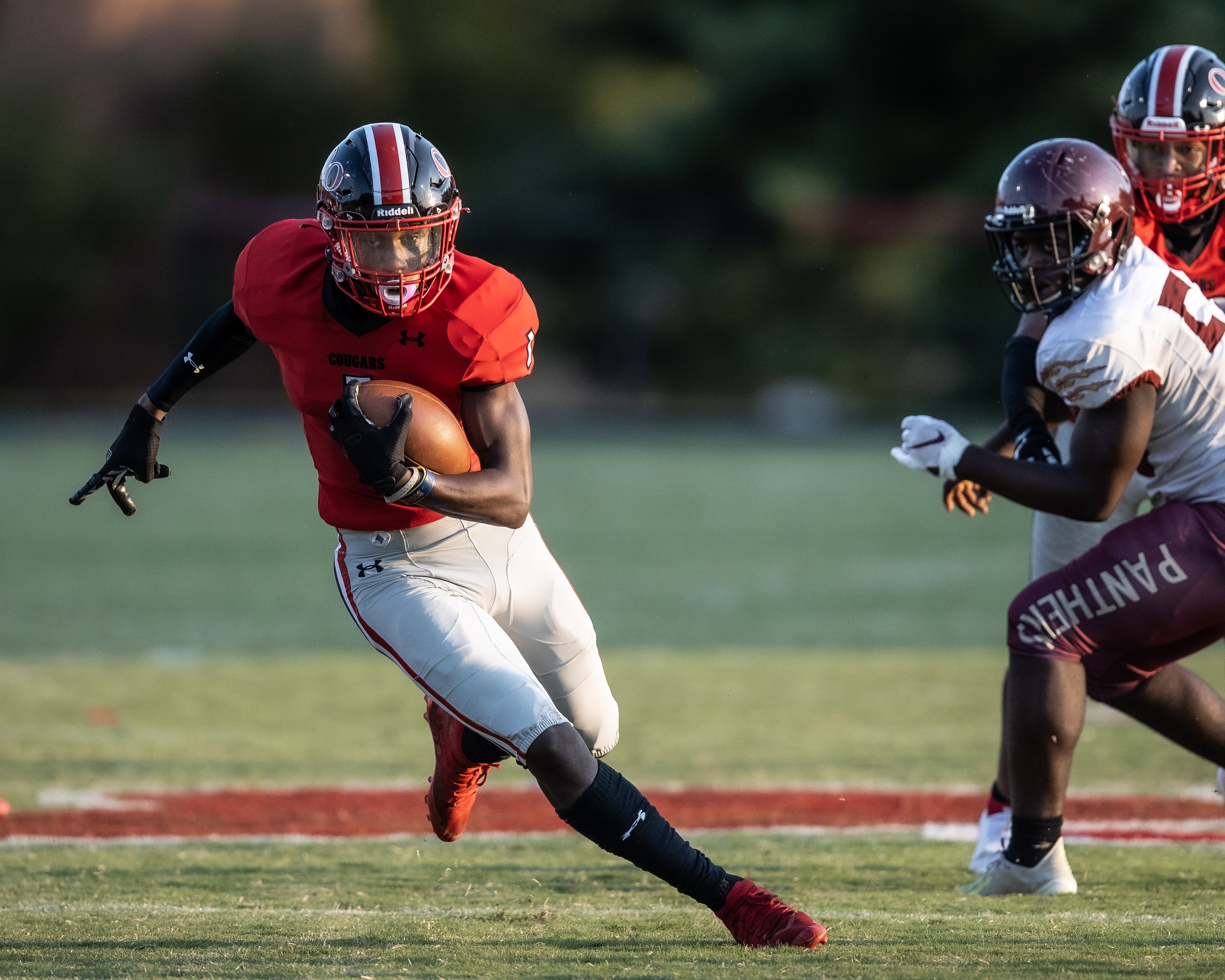 The Cougars took control for most of the game, but the defense was able to get the job done for the 20-13 victory over the Panthers.

“I’m just glad that we won the game,” said Quince Orchard Head Coach John Kelley. “We made the stops when we needed to make stops. When we were moving the ball, we were backed up pretty deep over there; that helped us a lot too.”

The Cougars opened the contest with a 6-play, 65-yard drive that resulted in quarterback Carter Taggart connecting with wide receiver Martavian Davis for the 20-yard touchdown to put the home team up 7-0 early.

“It was a hard-fought game,” Davis said. “I think we still have a lot to work on defensively, offensively. Paint Branch did a great job. They fought hard, but it’s all love to Paint Branch. Just came out on top.”

Then, on the ensuing kickoff, Panthers running back Khalil Radway had the ball stripped away and taken by QO’s Jalen Huskey, who took it back to the end zone for the special teams score, extending the shutout lead to 14-0.

Paint Branch did bounce back on their first offensive drive, though, as they drove 80 yards down the field on nine plays. The drive resulted in quarterback Octavian Smith, Jr. finding wide receiver Isaiah Russell in the end zone for the nine-yard touchdown, cutting the deficit to 14-7.

“He’s an outstanding player,” said Panthers head coach Michael Nesmith, “outstanding young man, outstanding leader for us. He checks all the boxes. He played his heart out tonight. Just came up a little bit short.”

The QO defense stepped up early in the second quarter and forced a turnover by recovering a fumble with Paint Branch deep in their own territory.

The Cougars followed this up with a 30-yard field goal from kicker Sam Smith to extend the lead to 17-7.

Late in the half, QO had a chance to score deep inside the red zone, but Taggart’s pass to Zach Zarchin was just short on 4th and goal.
“I don’t know how many times we had the ball inside their own 20-yard-line and got no points,” said Kelley.

Early in the third quarter, the Cougars extended their lead to 20-7 on a Smith 42-yard field goal that capped off an eight-play, 62-yard drive.

Later on, Paint Branch drove downfield and set up Radway for an 11-yard touchdown run, but a failed two-point conversion kept it a seven-point game.

The Panthers had a couple of late opportunities to try to tie it with a touchdown, as Smith connected with wide receiver Tavon Bailey, but was stopped short of the goal line by Bryce Barnes on 4th and goal.
Then with under two minutes to go, Smith was sacked by QO defensive lineman Christian Ose-Afiana on fourth down.

“It’s frustrating to turn the ball over three times deep in our own territory against a top program like Quince Orchard, which will make it tough for you to win,” said Nesmith. “It’s disappointing we made those mistakes.”
Next week, QO will travel to Bethesda to face Walter Johnson High School, while Paint Branch will look to bounce back on the road against Springbrook High School.