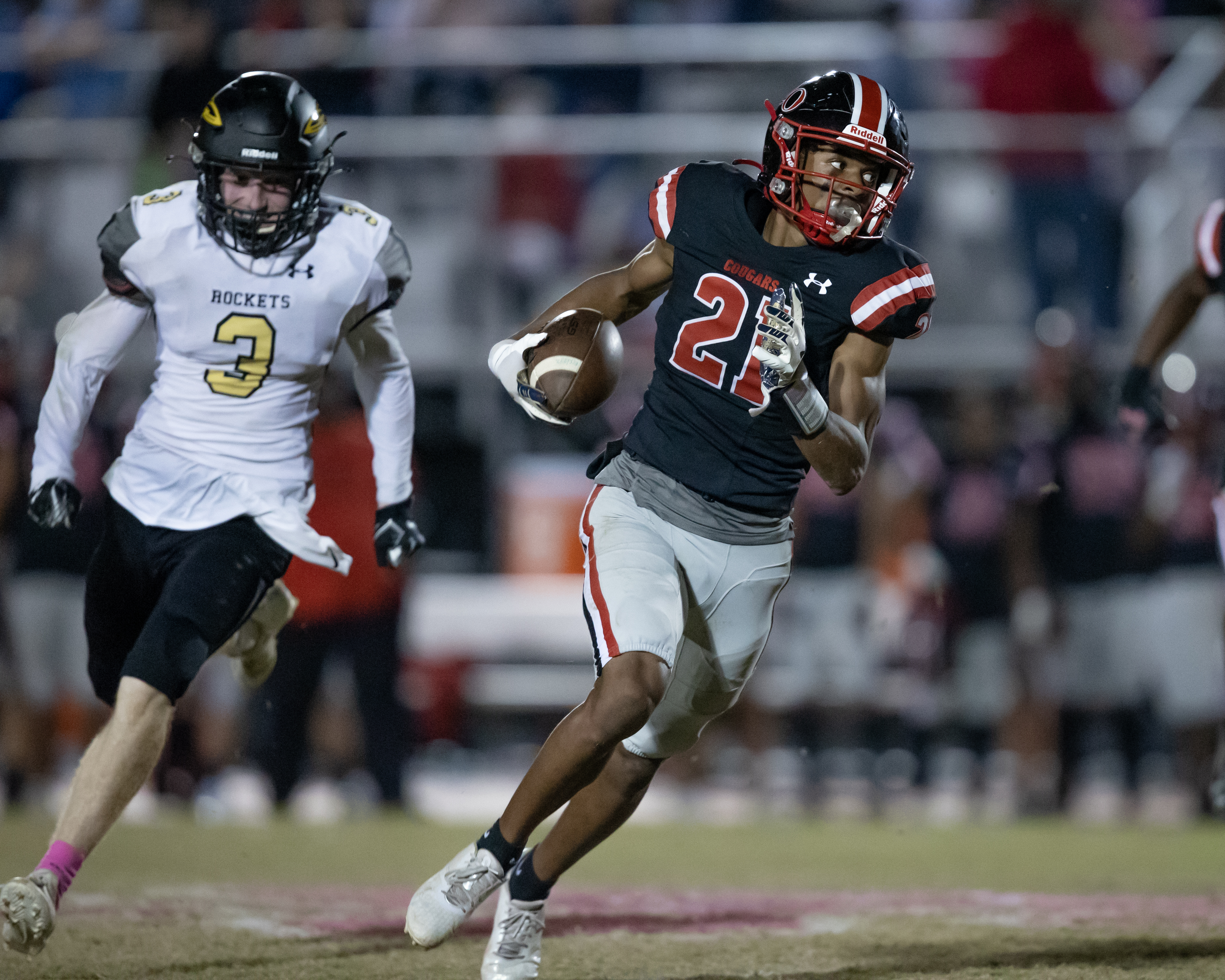 [See photos from the game by clicking here!]

GAITHERSBURG – The Quince Orchard High School football team has remained dominant during the 2021 season, as the Cougars have outscored their past three opponents 134-28.

Friday night against Richard Montgomery proved no different as Quince Orchard fired on all cylinders and blew out the Rockets 55-17 to improve to 6-0 on the season.

“Happy to be 6-0,” said head coach John Kelley. “I thought we did some good stuff, so we’ll go back and watch the film and correct some of the mistakes that we made.”

Running back Isaiah Blackman led the Cougars with four rushing touchdowns. His first score occurred on a 33-yard scamper through the Richard Montgomery defense with five minutes left in the first quarter.

“I feel like I had a pretty good game,” said Blackman. “My O-line did a great job of blocking, the team did everything they could to make the holes, and I just found my way.”

The Cougars defense also came to play, as defensive lineman Matthew Pinto recovered a fumble, which led to wide receiver Martavian Davis scoring on a six-yard touchdown run, as Quince Orchard led 14-0 at the end of the quarter.

Richard Montgomery (2-4) managed only a field goal, entering halftime with a 33-point deficit.

“We know QO’s good,” said Rockets head coach Randy Thompson. “We knew it was going to be a tough week. We’ve been dealing with injuries all year. They got us tonight. Hats off to them.”

Early in the third, Blackman carried a pile of players into the end zone from 18 yards out for his fourth touchdown of the game. When asked about his running back, Kelley said Blackman did a “very good job” carrying the team.

“We’ve had a pretty good combination with our two backs this year,” said Kelley. “One of our backs couldn’t play tonight, so he just stepped up and did a great job.”

The QO defense and special teams joined in on the scoring, as defensive back Steven Sannieniola returned an interception for a touchdown, while wide receiver Johnnie Castro took a punt to the house.

“I thought our special teams made some plays,” said Kelley. “It’s good to see that happen, and it was enough for us to continue to develop.”

The Rockets did find the end zone after a huge kickoff return by Marcus Pedone led to a rushing touchdown from Ashad Brooks. Tidiane Epps recovered a fumble and returned it for a Rockets score.

“It was nice being able to see Marcus and Tidiane make those plays,” said Thompson. “We like to see them a little earlier in the game, keep us a little more competitive, but those two guys are great senior athletes for us.”

Next week, Quince Orchard will look to stay unbeaten when they visit Gaithersburg, while Richard Montgomery will look to get back on track at home against Walter Johnson.