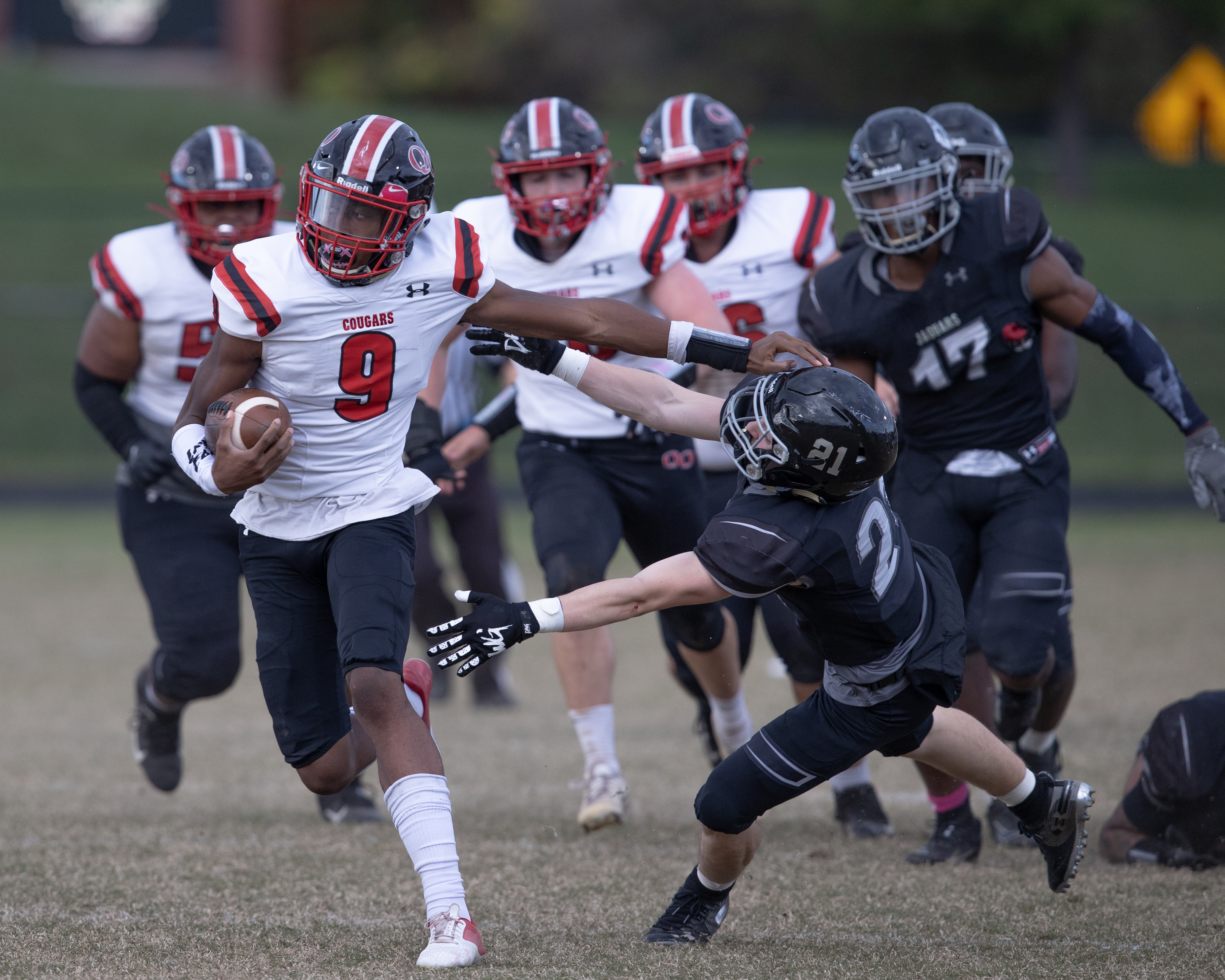 GERMANTOWN – Both Quince Orchard and Northwest High School football teams entered Friday’s rivalry game undefeated in what was touted as a possible Game of the Year contender in Montgomery County, Maryland.

However, it turned out to be a more lopsided affair than expected, as the visiting Cougars (8-0) took total control early, ultimately shutting out Northwest 31-0 for the Montgomery County 4A Division regular-season title.

“Our kids played hard,” Quince Orchard head coach John Kelley said. “We faced some adversity early on, and I’m proud of how hard our kids competed for the whole game. Really, really, super proud of them.”

Northwest (7-1) had only given up 23 total points all season and posted five shutouts. The first quarter finished scoreless but looked to be going into the home team’s favor as the Jaguars’ offense drove downfield. However, a muffed handoff resulted in a fumble recovered by the Quince Orchard defense.

Early in the second quarter, the Cougars wide receiver Donovan Brown confused the Northwest defense, lining up as the quarterback in a wildcat option play.

With the defense kept their eyes locked on quarterback Savan Briggs, Brown rushed across the field with ease for a 41-yard touchdown run for Quince Orchard’s first touchdown.

“It really felt amazing,” said Brown, a Syracuse commit. “Even starting the play, I knew like, ‘Yeah, they’re shook,’ because they didn’t know who was at quarterback. I guess that [we] were really confusing.”

“We practiced hard all week,” Briggs said about preparing the trick play. “I feel like we came out here and showed it. Donovan was able to get the first touchdown, and from that, we kept rolling, and it was great.”

With Quince Orchard up 10-0 in the third quarter, wide receiver Johnnie Castro’s jet sweep turned into an 18-yard touchdown run. Later on in the period, as Northwest looked to punt, a high snap caused the ball to float over the punter. The error allowed linebacker Sekou Kamara to recover the loose ball in the end zone for a Cougar defensive touchdown.

“We got humbled,” said Jaguars head coach Travis Hawkins. “It’s just that simple. They’re a good team. First half, we gave them 10 points, and second half, they ran away with it a little bit.”

The Cougars sealed their victory in the fourth quarter with a 25-yard touchdown run from Steven Sannieniola.

Changes to the divisional realignment for the 2021 season make it possible that both teams may play again in the state playoffs. The last time they faced off in the tournament, Northwest upset an undefeated Cougars team in the 2019 state semifinals, something Kelly does not take likely, calling his rivals “a really good, talented football team.”

However, for Brown and the rest of his Quince Orchard teammates, the high-margin victory was a statement to every high school team in the state.

“I feel like we just set a tone, and we left a mark to the point where I think people need to stop disrespecting us,” said Brown. “They’ve been telling us all week that we’re not that good, we’re going to lose to every team we play, so we left our mark.”

For the final week of the regular season, the Cougars will look to finish undefeated at home against Clarksburg, while the Jaguars will look to bounce back at Walt Whitman.