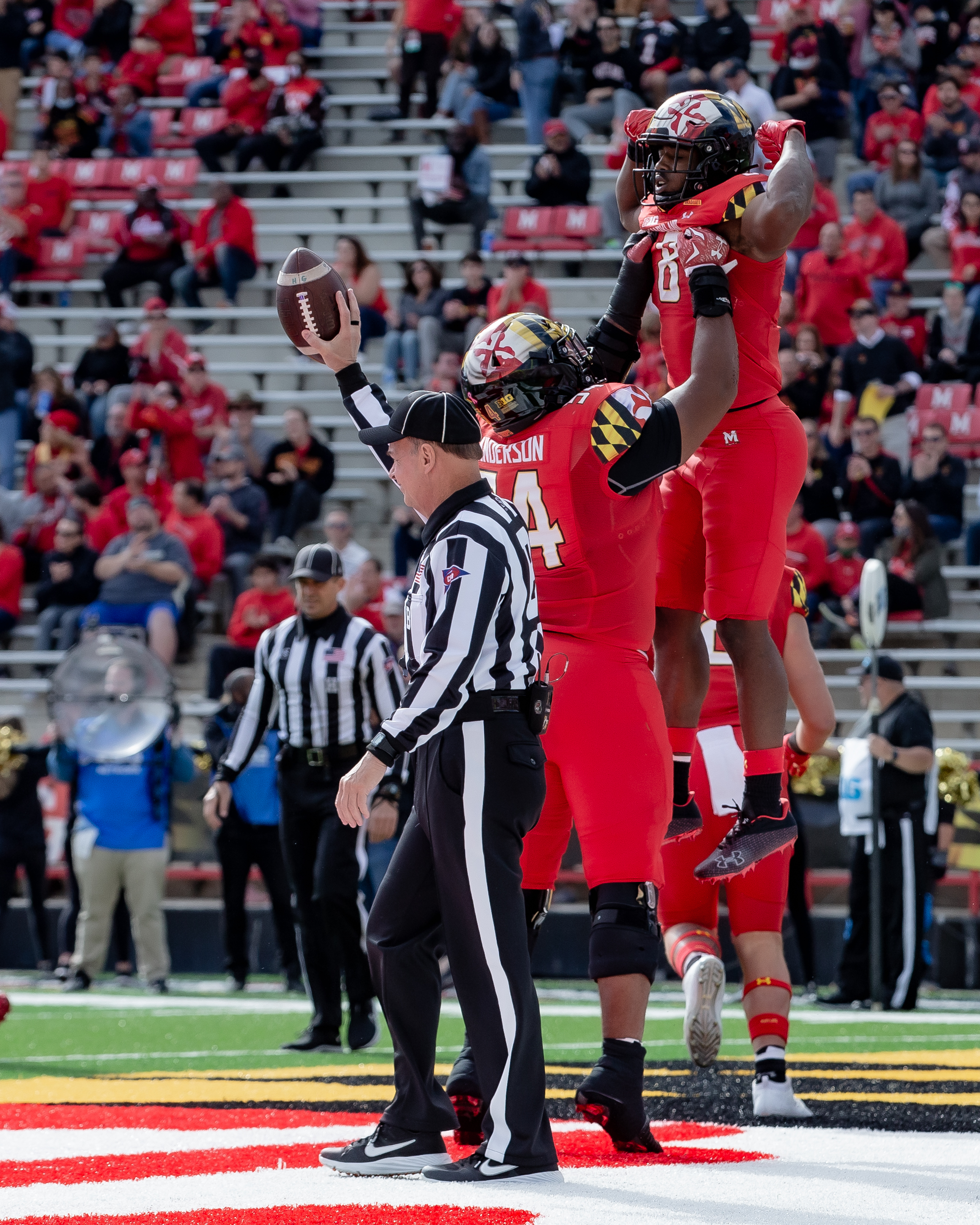 COLLEGE PARK – On Homecoming weekend, the University of Maryland football team bounced back from three consecutive losses to defeat a competitive Indiana 38-35 Saturday.

Despite playing a back-and-forth affair against a Big Ten adversary, the Terrapins (5-3) hope the win can help provide the winning momentum needed to become bowl eligible.

“Definitely wasn’t a pretty game, but we’ll take it,” said Maryland head coach Mike Locksley. “We needed it. Our players deserved it. Obviously, a lot of things to still get cleaned up from it, but it’s always good when you can clean mistakes up with a victory.”

Maryland capitalized on an opening seven-play, 35-yard drive courtesy of a 1-yard touchdown run by running back Tayon Fleet-Davis (Potomac High School). On their next offensive drive, the Terrapins drove down the field again on nine plays to set up a 1-yard rushing touchdown from halfback Challen Faamatau to take a 14-0 lead.

Indiana cut the deficit after a quick score by running back Stephen Carr. Trailing 14-10 early in the second half, Indiana took control as Carr raced 66 yards for the touchdown, giving the Hoosiers a 17-14 lead.

But the momentum soon swung back in Maryland’s favor, as Faamatau scored his second touchdown of the game off another 1-yard run. Quarterback Taulia Tagovailoa followed it up with back-to-back touchdown passes to wide receiver Carlos Carriere, from 14 and 45 yards out, to extend Maryland’s advantage 35-20 early in the fourth quarter.

Indiana didn’t back down, as quarterback Donaven McCauley connected with tight end Peyton Hendershot for the 18-yard touchdown pass along with a successful two-point conversion.

With under 90 seconds left, Terps kicker Joseph Petrino nailed a 41-yard score to make it a 10-point game, seemingly sealing the win.

However, McCauley completed a deep 52-yard pass to wide receiver Ty Fryfogle inside the 10-yard-line, setting up an eight-yard pass to Hendershot to drop Indiana’s deficit down to three points with 1 minute left in regulation.

Maryland ended any last grasp of a comeback when wide receiver Darryl Jones recovered the onside kick to finally confirm the win.

Tagovailoa played well, throwing 26 of 40 for 419 yards and two touchdowns, becoming the first Maryland quarterback with 400 passing yards in a single game since Danny O’Brien in November 2010.

“It just feels good to be back in the win column,” said Tagovailoa. “Stats obviously come with it. First thing for us is just winning football games.”

Maryland will be back at home next week to take on Penn State.