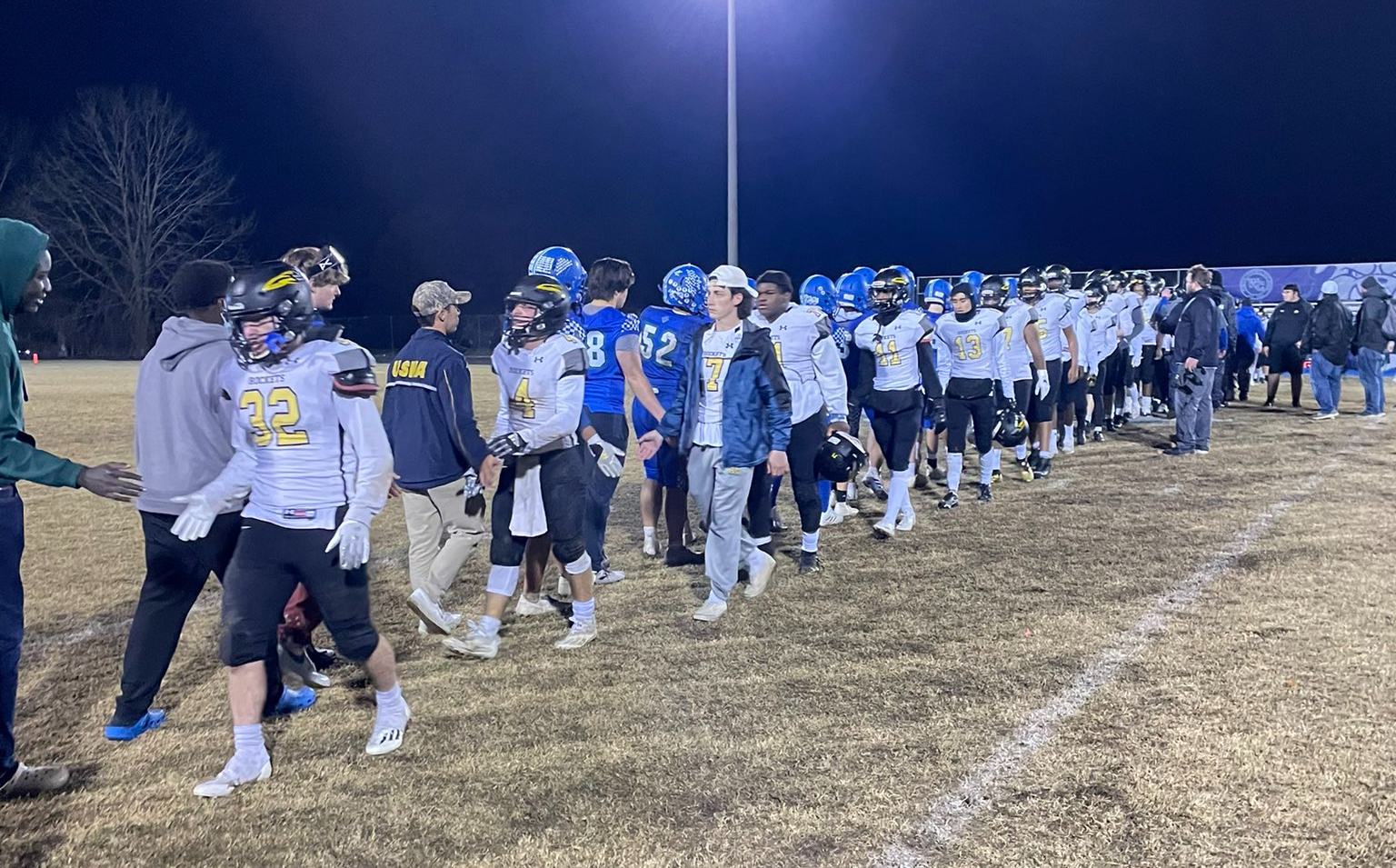 In a very competitive and close affair, the Bulldogs did just enough for the 20-14 home win and Churchill’s first playoff victory since 2011.

“Team played well,” said Churchill quarterback Jaden Selby. “It was a nail-biter, so it was definitely a great game. Feels great to have our first win in 10 years in the playoffs.”

Churchill struck first in the opening quarter when Selby connected with wide receiver Jamie Calhoun, who was out the previous week with an injury, for a 30-yard touchdown pass.

“I’m glad he’s back,” said Selby. “He was out last week. He got hurt against RM two weeks ago, but he’s a dawg. Watch out for him next year.”

Later in the second quarter, Richard Montgomery attempted to punt, but the snap went over the punter’s head, which allowed Churchill to recover the loose ball at the Rockets’ 2-yard line. Two-way athlete Bryce Wilson quickly took advantage, scoring on a 2-yard run to extend the Bulldogs’ lead by touchdowns.

Just before the end of the half, Richard Montgomery quarterback Anthony Dixon Jr. led the offense downfield, but as he attempted to throw a touchdown, his pass to the end zone was intercepted by Wilson.

“It’s all about staying focused and staying composed,” said Wilson. “We got beat one time, but we got back and fought back, and were able to get that interception at the end of the half.”

The visitors fought back as wide receiver Chico Lopez returned the opening second-half kickoff 65 yards for a touchdown to cut their deficit to seven points.

However, it could not stop a charging Churchill, who extended the lead when Selby’s deep pass landed in the hands of Calhoun, despite being tipped by the defense, for the 68-yard score.

“Jaden’s been doing it all year,” said Churchill head coach Joe Rydzewski. “First thing about Jaden is he’s just a great kid, and now he’s doing it on the field.”

Richard Montgomery continued fighting back as Dixon connected with wide receiver Marcus Pedone for a third-quarter touchdown. The Rockets recovered a fumble late in the game and attempted a quick score, but Churchill’s defense held them short on fourth down, ending the late-game rally.

“The defense has been kind of with us all year,” said Rydzewski. “For them to come up big in that situation was great.”

The win was memorable for Churchill’s assistant coaches Aik Davis and Matt Miller. They were both players on the Bulldogs team that last won in the playoff in 2011, a first-round victory over Gaithersburg.

When comparing their win from 10 years ago to Friday’s victory, Davis said the two games felt “oddly similar” with “a lot of fight” shown by both Churchill teams.

“It just feels amazing to have this victory and have the kids experience what we could experience 10 years ago,” Davis said.

“I’m just so proud of these kids,” said Miller. “It was an awesome win. I’m so happy that they get to experience the same things we got to experience because these are the memories that they will have for the rest of their lives by playing football.”

Churchill moves on to face No. 2 seed Northwest next Friday in the second round.

“It will be a dog fight,” said Wilson. “We’re the underdogs. People are doubting us. People don’t think we’re going to win. We’re ready.”