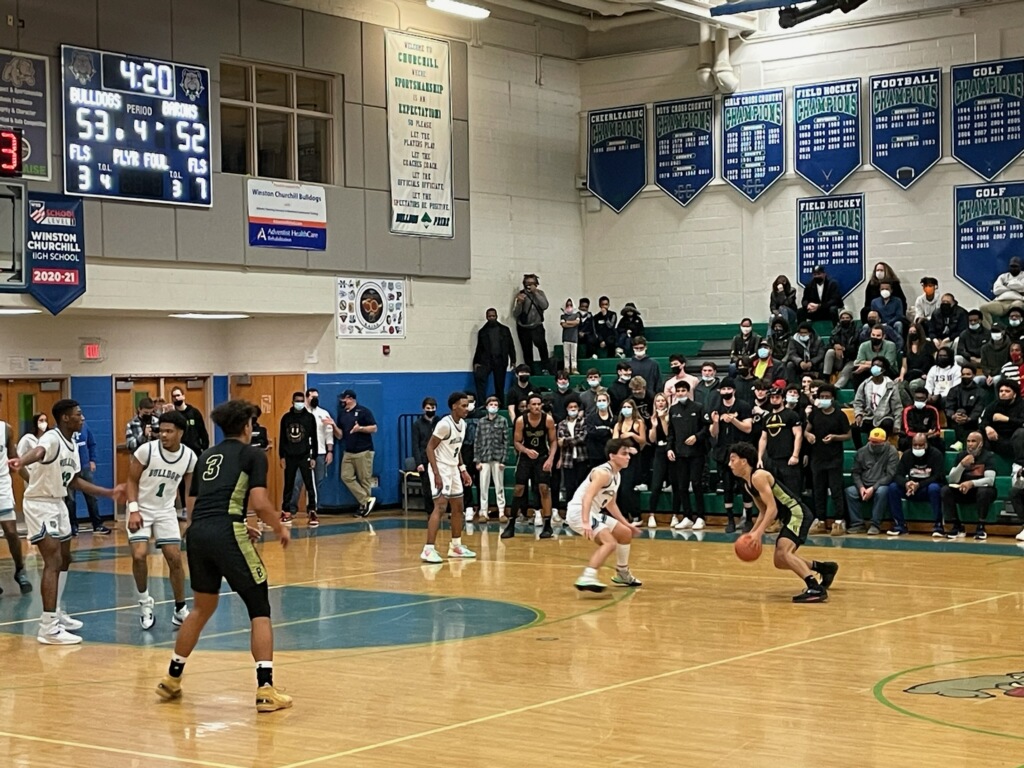 The Barons (14-3) arrived at the Bulldogs’ home court ready to make a statement and kept the affair close before ultimately pulling away late in the fourth quarter. Alvin Jackson led Bethesda-Chevy Chase with 12 points in the first half and 10 more in the second to finish with 22 points.

“We knew it was going to be a good game,” said B-CC head coach Sean Tracy. “They’re a great team, obviously, ranked in the polls. Just glad that our guys were able to pull through and persevere when we face that adversity.”

The first quarter set the game’s tone with many shots and takeaways as the Barons led 18-17.

Making his first appearance following a three-game suspension, Bulldogs star Tre Scott dropped 13 points in the first half, including three baskets from behind the arc.

“The guys are very happy to have him back,” said Churchill head coach Dave Blumenthal. “He served his suspension with remorse and grace. It was good maturity for him. He’s excited to be back.”

The Barons gained steam before halftime, and in the third quarter, the visitors received strong shooting from Jackson, Sherman Weatherspoon, Logan Davis (13 points) and Mati Szpin to take a 48-40 lead.

“It doesn’t really matter who scores for the B-CC Barons,” Weatherspoon, who finished with 16 points, said. “We always want to win. Whoever is hot that night, it’s just their night.”

The fourth quarter involved multiple lead changes, including Churchill reclaiming the lead after an 11-2 run. Midway through the final frame, Bryce Wilson’s 3-pointer looked to have swung the game back in the Bulldogs’ favor.

However, B-CC fought back with a run of their own, featuring multiple players in the effort as well. Jackson, Davis and Szpin all scored 3-pointers to help the Barons regain a slim advantage.

While Churchill cut the visitors’ lead down to 2 points late, John Moody converted four free throws in the game’s final moments to give Bethesda-Chevy Chase the victory.

“He’s a guy that hasn’t been getting a lot of playing time,” said Tracy. “But he’s always been ready, came in there. He was the difference in making those free throws.”

Zeke Avitt led Churchill with 19 total points in a losing effort, while both Wilson and Isaiah Mbeng dropped 12 points each.

“Losing stinks,” said Blumenthal. “For us, it’s our first loss in our program. We call it ‘learning lessons.’ It’s the first time to see what type of mental fortitude we have moving forward.”

While both teams split the season series, they can meet again in the 4A Maryland state playoffs.

“It will be a great matchup,” Jackson said of the possible playoff game. “We’re looking forward to them. They’re a great team. We do expect to meet them later on.”