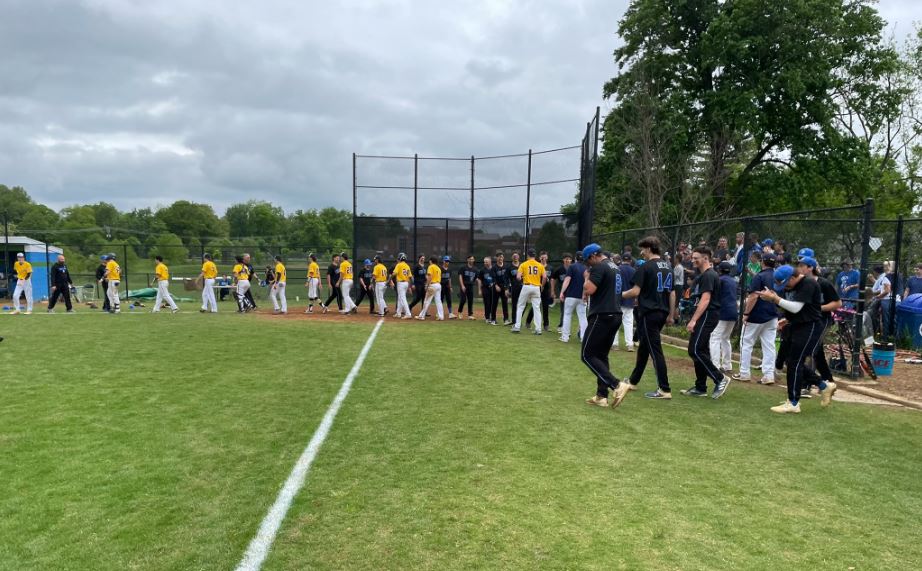 POTOMAC – The Winston Churchill High School baseball team has entered the playoffs as one of the top teams in Maryland, as they hosted Bethesda-Chevy Chase in a 4A regional semifinals matchup.

Strong pitching and solid hitting were enough for the top-seeded Bulldogs to defeat the Barons 4-1 Saturday afternoon.

“My arm felt good,” said Hacopian. “My secondary stuff, my off-speed was feeling well, and I had some decent juice in my fastball today. Guys defensively were playing awesome today.”

Nathan Gumagay scored the first run of the game on a passed ball in the bottom of the second inning, right after he got a single, then advanced to second base on a wild pitch, and then to third.

“I was feeling great,” Gumagay, who finished 2 for 2 batting with one RBI, said. “Seeing the ball really well off the hand, really getting the barrel through the zone, that’s what really helped me, and sitting on the curveball, of course.”

But in the top of the third, the Barons tied it up at 1-1 when Adam Niman hit a ground ball and reached base on an error by Churchill first baseman Isaac Kreisler, allowing Paul Fine to score.

“It was a hustle play,” said Bethesda-Chevy Chase head coach John Schmidt. “They kicked it around a little bit, and we tried to take advantage of it. Paul’s been carrying us the whole year. Him and Beck [Urofsky].”

However, in the bottom half of the inning, Erik Rindner and Gumagay hit back-to-back sacrifice flies that resulted in two more runs, putting the Bulldogs ahead 3-1.

Bethesda-Chevy Chase came close to scoring again in the top of the fourth as Miles Kessler attempted to steal home plate. However, Churchill center fielder Matt Roche made an incredible throw to home plate, allowing Rindner to tag Kessler just in time for the third out of the inning.

“This was probably the most electric game all year,” said Hacopian. “We had probably 300 fans here today. It was a good vibe all day. Guys on the field were pumped up today.”

Roche also looked solid at the plate with two hits on three at-bats, even scoring a run.

The Bulldogs added another run on the board when Zane Gross hit a fly ball to deep left field for a home run, making it 4-1 in the bottom of the fifth.

“The bench was crazy,” said Gumagay. “The atmosphere that they brought was the best all season.”

Barons pitcher Beck Urofsky went all six innings on the mound, but his team couldn’t accumulate much hitting against Hacopian, as the team only had four hits all game.

“I love these guys,” said Schmidt. “They left everything on the field. They battled through a lot this year. To go toe-to-toe with one of the top teams in the state, that says something.”

Churchill advances to the regional final round, where they will host No. 2 seed Walter Johnson on Tuesday, May 17.

“We’re confident,” said Hacopian. “We just keep it with our team, everything within us. Doesn’t matter who we play. We just play our game.”