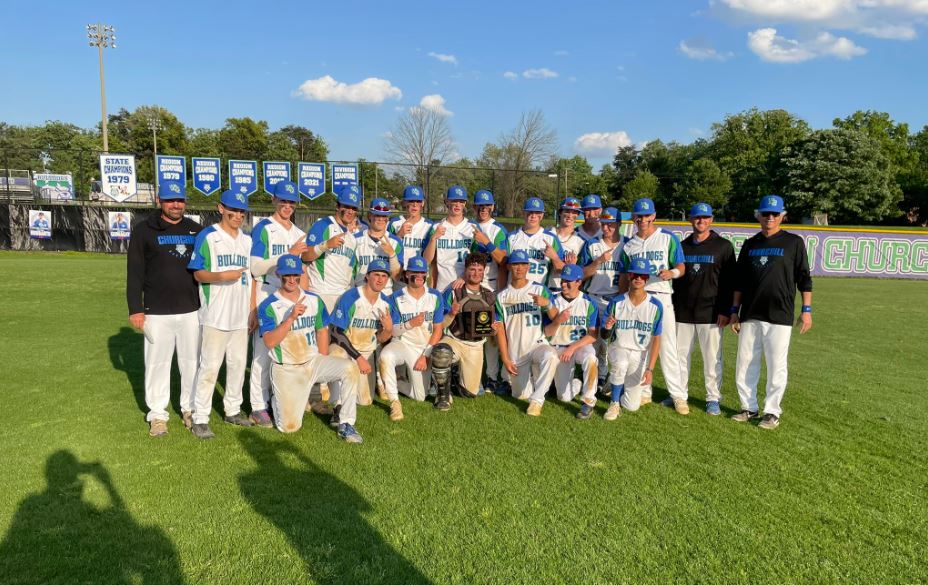 POTOMAC – The Winston Churchill High School baseball team looked to clinch the 4A West regional title in consecutive years as they faced No. 2 seeded Walter Johnson.

The Bulldogs did just that as they ran the bases multiple times in the first three innings and staved off a late comeback attempt to beat the Wildcats 11-6 to advance to the state quarterfinals for the second year in a row.

“I feel great,” said Churchill head coach Pat Skellchock. “But I feel like we still have some unfinished business, and we were supposed to do this. WJ was a very, very good team.”

The Bulldogs’ dominant run began early in the bottom of the first inning when Erik Rindner hit a grand slam home run over the left-field wall to make it 4-0.

“It felt awesome,” said Rindner. “It was a tough at-bat…[was] trying to get the barrel on the ball. The wind helped me a little bit, but it felt good, got the team on their feet.”

The homers kept coming in the same inning when Michael Demske hit a two-run dinger to center field to extend the lead to 6-0.

Then in the second inning, Isaac Kreisler hit a 2-RBI double to extend the shutout lead to 8-0, while the third inning featured Chris Hacopian hitting a three-run bomb over right field that made it 11-0.

“I was just looking for a good pitch to hit, and I got one,” said Hacopian. “Good thing our guys executed today, and we got on base all day.”

Hacopian finished the afternoon 2 for 4 at the plate with three RBIs and two runs, while Kreisler also had two hits on four at-bats.

“We just won the regional championship,” said Hacopian. “But we all know we’ve got more work to do. We’re ready for that, and we’re definitely going to enjoy this one.”

However, Walter Johnson showed signs of a comeback the next two innings to avoid the mercy rule when Jay Wandell and Dan Avillo got RBI knocks in each inning.

“It’s the last game of the season,” said Wildcats head coach Steve Sutherland. “You never want to end by mercy, of course. But Churchill was a hell of a team this year, and they earned the one seed.”

With the score 11-3 entering the seventh inning, Wandell, Erik Rees, and Jake Goldberg all had back-to-back-to-back hits that drove in runs for Walter Johnson for a mini-comeback. However, Churchill secured the final out to seal the victory and regional title.

“I knew we were going to get through it,” said Skellchock. “It’s just that we were waiting on that last out there. I give WJ a lot of credit.”

Last season, the Bulldogs clinched a berth in the state quarterfinals but fell to Dulaney in a 4-3 walk-off loss.

“We remember what happened last year,” said Hacopian, “so we’re very motivated to win this and to do better than we did last year. We’re ready to go. We’re excited.”

“I keep saying, ‘Job ain’t finished,’” said Rindner. “The regional championship is just one step in the road.”

Meanwhile, Wandell went 3 for 4 for three RBIs and a run, as Sutherland is proud of his Walter Johnson team for finishing 18-3, the best record in school history.

“Fortunately for us, we have a lot of young guys returning,” said Sutherland. “This is just the start.”