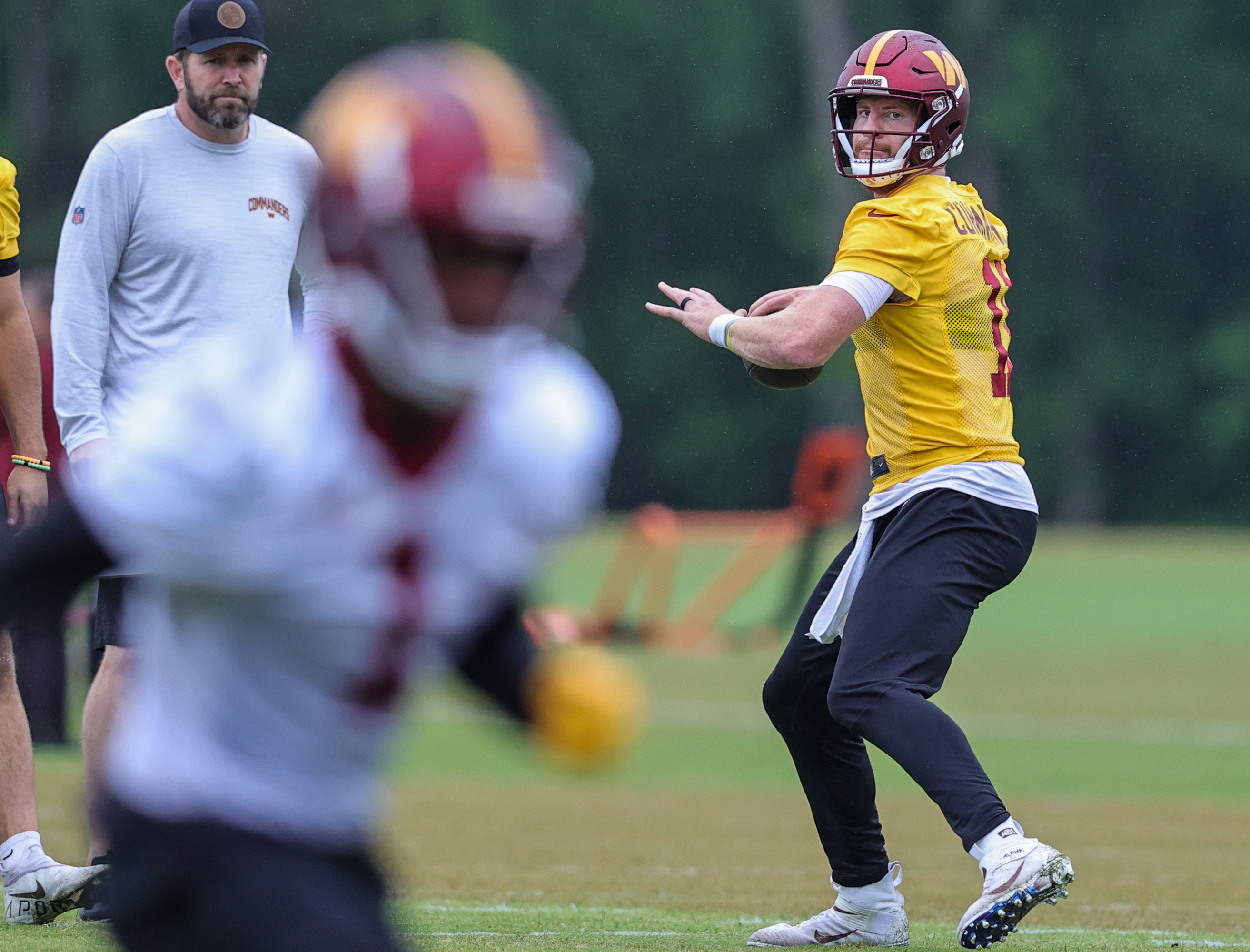 On if he thinks the offense can take a step forward with QB Carson Wentz as QB1:

“Well, what I think is I’d like to see the rest of the playbook grow. There are some things that Carson does that not a lot of other quarterbacks can do, with his arm strength and his ability to throw the ball specifically vertically. So, yeah, do I expect us to step forward? I do. I expect us to be able to really expand on what we’ve done in the past.”

On Chase Young being back at OTAs and on what that means for the team:

“I think it’s a good thing. Again, having one of your veteran players, one of your leaders out and around in spite of the fact that he’s rehabbing, it’s good. It is voluntary obviously, and minicamp is not for a couple more weeks, but for the most part, having guys here is very important.”

On if it’s still too early to know when Young will participate in practice:

“Well, to me it is. I’m not the doctor, obviously. The doctor has been pleased with it. There is a plan, they’re working on that plan, and we’ll see where he is once we get ready for training camp.”

On if he is familiar with the facility in Colorado that Young is rehabbing at:

“I’m not familiar with it. I have heard of the guy he’s working with [Chris Knott]. I do know that there is a plan and that’s probably the biggest thing more than anything else is that there is a plan. And we’ll continue to work that plan. He had a checkup with the doctors, Dr. Andrews and his staff mapped out the rehab plan. [Washington Commanders Head Athletic Trainer] Al Bellamy has him right now, so while Chase is here, obviously, Al will be doing his rehab for him.”

On if having a new trainer allows the players to rebuild faith in the training staff:

“I’d like to believe we have them already right where we need them. The only guy that went somewhere to workout with somebody was Chase. But for the most part, we had everyone else here. To me, it’s solid. Chase opted to do that, which is fine. He has the plan. That’s probably the most important thing, is so long as he’s working the plan.”

On if he has a reaction to the House Committee on Oversight and Reform requesting Dan Snyder to appear at a June 22 hearing:

On CB Benjamin St-Juste working in the slot:

“Pretty excited about him. He’s come back, he looks healthy, he’s working hard, he’s growing, he’s developing, he’s learning. I’m real appreciative of that. There are some things that you can do with a big corner in the slot when they put a big receiver in the slot, so those are some things we have to look at. Because, again, it’s going to be about matching and you want to make sure you have the right body type on the right type of a player that’s in there. So that’s kind of what the thought is there. He will play on the outside as well, but we have to be able to say, ‘Hey we can put a big guy there.’”

On CB Kendall Fuller and why the scheme seems to fit him so well:

“I think playing on the outside for him fits him because he plays with vision and he understands that a lot better than a lot of other corners I’ve seen. The only other guy that I ever really saw that really understood playing with vision was [former Carolina Panthers and Washington Commanders CB] Josh Norman. I think he did it very well. I watch Kendall and Kendall does that very well.”

On if Chase Young is on track with where the team and doctors expected him to be:

“I believe so. I believe what he’s doing is the plan. Whatever the plan is, because that’s beyond me, my understanding is he’s following the plan.”

On the growth he’s expecting from DE Montez Sweat this year:

“I think his presence. I think as far as his skillset goes, it’s understanding how to use it. He’s got a tremendous skillset, he really does, and as he continues to grow and learn and understand how to use it, he becomes more and more dynamic as well. I think it’s the same thing with Chase. Once we get Chase back on the field it is understanding how to use his skillset, not just the raw power that he has, or the athleticism. For Montez, it’s the same thing. But I think if you haven’t noticed he brings a little bit of energy. You hear his voice out there and you hear how it ramps things up, which we’ve got to keep it down. We’re trying to not get anybody hurt right now. We’re really just trying to learn and grow and develop.”

On if Young can be coached up about the mental aspects of the game during this time:

“Yes. Again, it’s seeing the installations and seeing the tape afterwards, getting an opportunity to listen to the coaches as they point out the things that are happening that are good and bad. You can learn from that.”

On how an effective run game along with opening up the playbook with Wentz’s physical skills can successfully marry the two style:

“I don’t think it’s very difficult at all. In talking with [Offensive Coordinator] Scott Turner, and Norv [Turner] is here as well, and I’ve talked to Norv a lot about that, having worked for him for four seasons and having been around him probably for the last five years, that’s a big part of it. If you run the ball effectively, you’re going to be able to throw the ball effectively because you’re going to take the pressure off the quarterback to have to constantly make plays. If you’re throwing the ball well, you’re going to open up the running game. So, to be able to do those things together in a collaborative effort I think is going to create some real positive things. As I said, during that four-game streak, those were the things that we did. We ran the ball effectively. I’m trying to remember the exact number but I believe on the average we ran the ball something like five or six times more in each one of those wins, and by being able to do that, we take the pressure off the quarterback where he has to make plays.”

On how he defines success for the team this year:

“Winning. Honestly, I do. Whether it’s taking the next step forward, growing and developing, I think that’s a huge step. I think finding players at the positions that we’re looking at, that’s another huge step. That’s a win. Playing hard, playing physical, playing fast, playing smart is a win. And then winning games. That’s really ultimately how we’re judge. And I said it, this is our third season and I’d like to see the growth continue and I’d like to see us get to another level. I believe we can, although this is the first year with Carson as our QB1. But, I do think we can develop and grow as a group together both offensively, defensively and in special teams. But to me, it really does come down to winning.”

On having a vocal leader like Young back out at practice:

“I think it’s good. He was here yesterday as well, but having them integrated back into the team setting, I think is important. I think it’s great because he is one of those guys that has an infectious energy level about him, and when you bring energy, players feed off the energy. As I said though, we’ve got to be careful. We don’t want to over-ramp practice up right now because we’re not in pads. This is really about developing and growing.”

On if he wants Chase Young to be more of a conscious leader:

“Well, I think to me it’s about being organic and letting it happen naturally. And a lot of it also is the impact you make on the field. It’s a lot easier to lead, obviously, when things are easy. But when things are tough, it’s being able to find the right style of leadership, and that I think is also important as well. So, there’s a lot of things that he can glean from being out here and watching and seeing how things are happening. Like today would’ve been a great day and would have been an easy day to lead. It’s when it’s the doldrums, it’s a drag, it’s hard to be out there, practice isn’t going well and you’re not having success on either side of the ball and that’s the side that gets low. Now how do you get them to build it back up?”