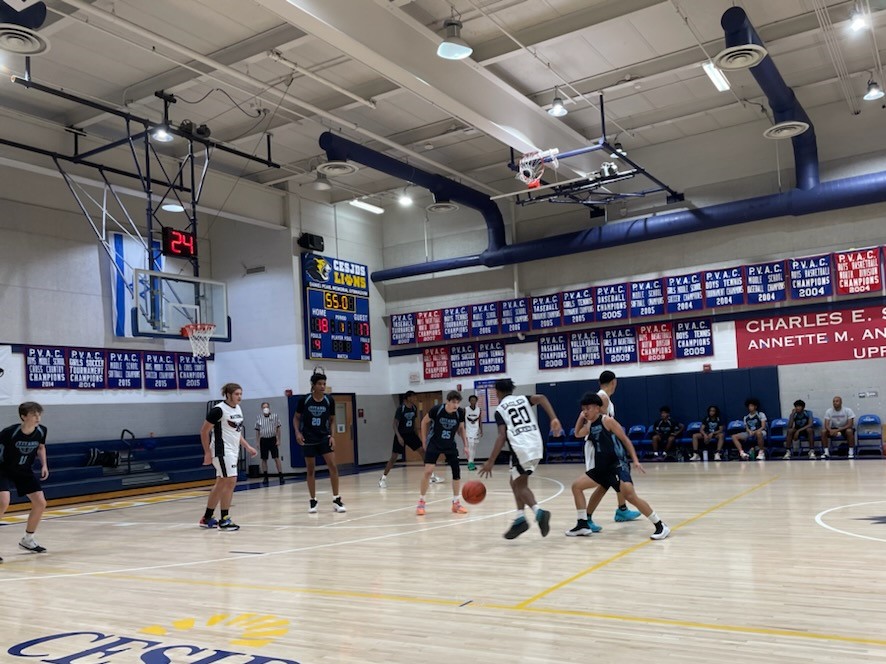 The very competitive affair came down to the wire as Logan Donnelly converted the game-winning 3-pointer with three seconds left to give the Montgomery County-based Titans a 46-44 victory over the Eagles.

“It’s big to beat a team like this,” said Donnelly. “But we know we can beat teams like this.”

Donnelly finished the night with 15 total points, all 3-pointers.

“Happy for that kid,” said Einstein head coach Justin Taylor. “He made one, [and] then missed two in a row. But then he kind of got down on himself but came back in the game. I just told him to keep letting it go.”

Mondyu Richards added 14 points for the Titans, including eight in the second half.

Einstein only won 10 games during the high school basketball season. The program is losing about eight seniors, including their leading scorer Dylan Muir. However, most of the players who played Tuesday night also received a lot of playing time last season.

“This summer, we’re trying to build depth,” said Taylor. “We’re trying to grow as a team because any given night, it could be any one of our guys leading us in scoring.”

“We trust each other a lot,” said Richards. “We have a lot of chemistry. I’m really confident. I think we’ll do really good.”

“We were out there fighting,” said Eagles head coach Vito Buckle. “But we made too many mistakes down the stretch.”

McLaughlin is a rising freshman who Buckle is trying to get as much experience as he can between the Maryland Elite league and the Capitol Hoops Summer League at DeMatha Catholic High School.

“We’re trying to train him to be the future of our program,” said Buckle. “He’s a heavy guy. He’s in training. Trying to get ready for the big level.”

National Christian only had six active players against Einstein, but the Eagles had several new recruits from its junior varsity squad, including Austin Trout and Andrew Ramirez.

The Eagles won the 2021 Maryland Elite championship, but Buckle hopes to have more of his players playing games and developing as the summer progresses.

“It was a tough week,” said Buckle. “We’ve had five games already this week, and we’ve got about four more to go, so we’ll be fine.”

“It was pretty rough last year,” said Buckle. “We’re just trying to figure out this year how we’re going to do a lot better because we’ve got a whole year under our belts. And we’ll be a lot better.”