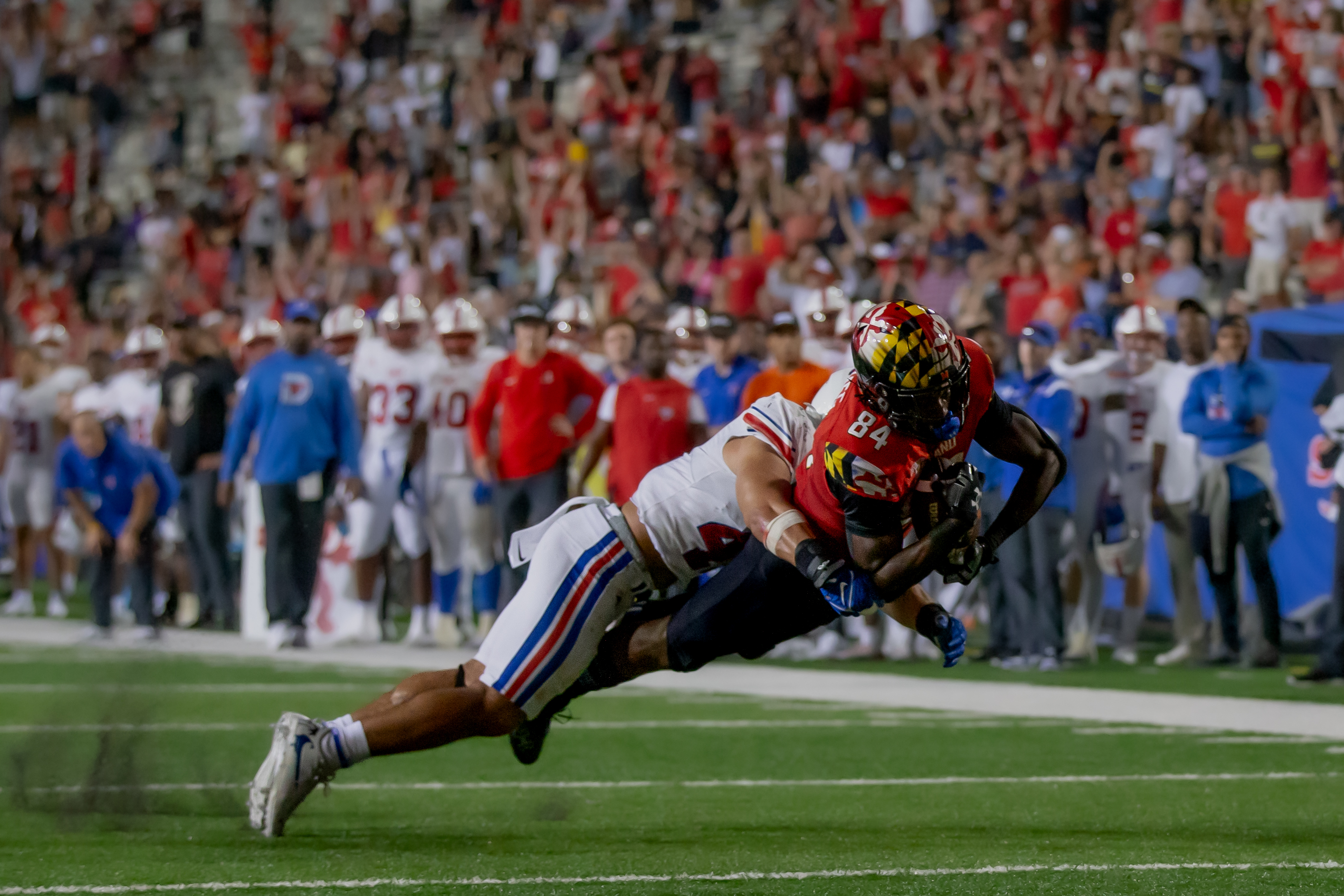 COLLEGE PARK – The Maryland Terrapins football team had their last non-conference game of the season as they hosted 2-0 SMU of the American Athletic Conference.

The Terrapins had to overcome many challenges, including a flashy SMU offense and multiple penalties, but they got the job done for the 34-27 victory.

“We did not play our best football today,” said Maryland head coach Mike Locksley. “But it was against a really good team. To find a way to win, we needed a game like that.”

The Terrapins committed 15 penalties, a stat that upset Locksley during his postgame comments.

But through all the competitiveness, Maryland pulled through in the end, as its defense finished with three takeaways, including two interceptions and one fumble recovery.

“I think it just shows what our defense is capable of doing,” said defensive back Beau Brade. “First two games, we didn’t have any takeaways, so it was a big game for our takeaways.”

Taulia Tagovailoa was solid through the air, going 17 of 23 for 214 passing yards and two touchdowns.

Roman Hemby also had another outstanding rushing performance, finishing with 16 carries for 151 yards and one score.

“We had a great opportunity tonight against a great team,” said Hemby. “Just sticking to the game plan, I feel like I was able to make some great plays through the course of our offense.”

Leading 6-3 at the beginning of the second quarter, Mustangs quarterback Tanner Mordecai connected with RJ Maryland (not a typo) to make it 13-3.

However, the Terrapins responded with two scores of their own, including a 1-yard rushing touchdown from Antwain Littleton and a Tagovailoa 48-yard pass to Rakim Jarrett for a score to make it 17-13.

But SMU soon took a 20-17 halftime lead, thanks to a 13-yard touchdown pass from Mordecai to Austin Upshaw.

In the third quarter, Maryland tied it up at 20-20 with a 41-yard field goal by Chad Ryland.

However, the Mustangs took the lead back as Mordecai found Moochie Dixon in the corner of the end zone for the 7-yard score, making it 27-20.

On their next offensive possession, the Terrapins completed a nine-play, 68-yard ensuing drive, which resulted in Hemby taking it in from 1 yard out to tie the game early in the fourth quarter.

On SMU’s ensuing drive, the Mustangs drove down the field, but Mordecai had a pass intercepted by Dante Trader Jr.

The turnover led to a 10-play, 46-yard drive from Maryland, as Tagovailoa connected with Corey Dyches for a 5-yard touchdown for the win.

The Mustangs had two late fourth-down opportunities to keep the game going, but the Terps defense did its job by stopping them both times.

Next up, Maryland begins Big Ten Conference play as they head over to Ann Arbor to face Michigan next Saturday at noon.