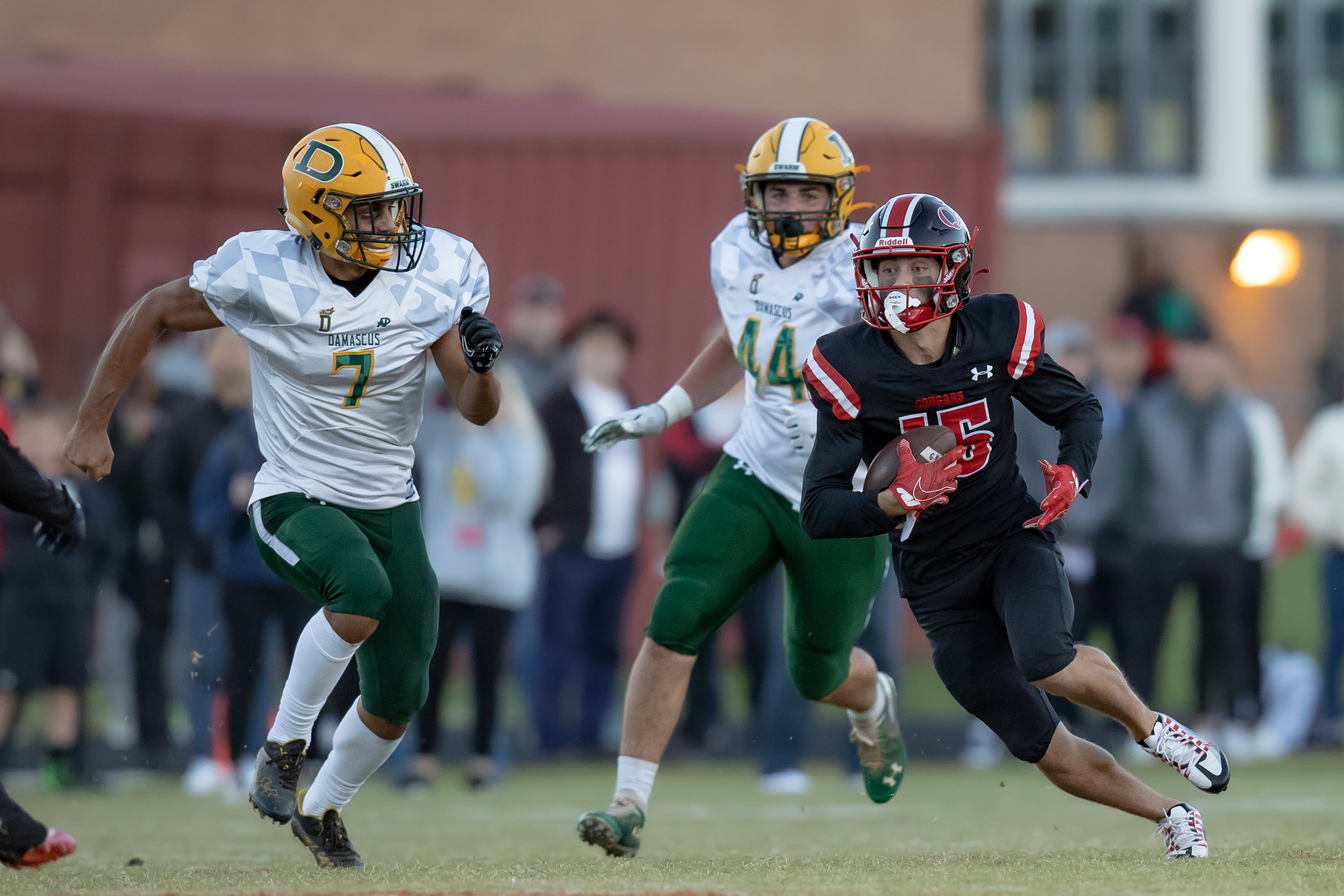 [See photos from the game here!]

However, everything changed after halftime.

The Cougars, the defending 4A state champions, regained their composure to score 28 unanswered points as Quince Orchard pulled away for the 28-0 victory over Damascus to remain undefeated.

“I was proud of how hard our kids played, especially in the second half,” said Quince Orchard head coach John Kelley. “Kids stepped up and rose to the challenge.”

The Cougars’ defense has not allowed a single point all season through four games.

“It says a little bit,” said QO linebacker Matthieu Longa. “But there’s still room for improvement because if you watched the game today, we had a lot of mistakes, and we still need to improve.”

Neither team could score in the first half, as both defenses did their jobs proving why they’re two of the best teams in the county.

“Everybody would love a Dillon Dunathan on their team,” said Hornets head coach Josh Klotz. “We’re lucky to have him on. He’s a hell of a player, and I look forward to him doing great things all season.”

Damascus did attempt a field goal at the end of the half, but Kyle Poudyal’s 31-yard attempt was no good, leaving the score scoreless at halftime.

But early in the third quarter, Quince Orchard running back Iverson Howard ran past multiple defenders to reach the end zone for a 58-yard touchdown.

“My running back coach saw me bouncing outside a lot,” said Howard. “He said, ‘Stay in the hole, get tough, don’t get tackled by one person, and keep pushing.’”

“You’re not going to be up 35-0 against everybody,” said Kelley. “This was a challenge to our football team. You’ve got to make plays.”

Then, right after an interception, QO had the ball in Damascus territory, setting up Howard for a one-yard rush into the end zone to extend the lead to 21-0 late in the third.

“It just shows that we are great titans,” said Longa, “that we can compete as well as well-coached teams, and how well-rounded we are through defense and offense, and it shows how great of a program we are here.”

The last score came midway through the fourth quarter, as Briggs found Zack Zarchin for a 30-yard catch-and-run touchdown.

“What really changed is we’ve been putting a lot of work in,” said Howard. “I feel like no team is putting in as much work as we have. We’ve been keeping tough, kept pushing, kept working.”

The Hornets did attempt to put some points on the board at the end, but the Cougars’ Ayden West intercepted quarterback Thomas McDarby’s pass to the end zone.

“I thought we fought hard against a 4A state champion favorite,” said Klotz. “I thought our kids fought to the end. Just a couple of big plays that we’ll learn from and fix for the very end of the season.”