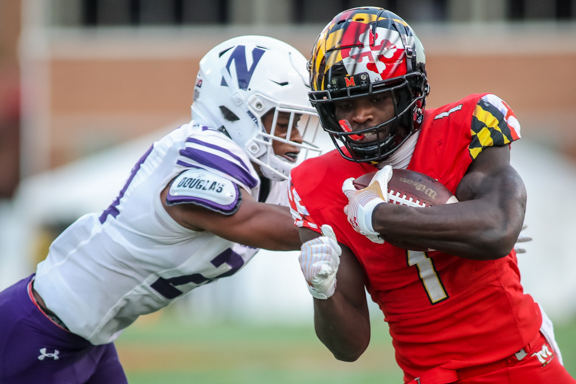 COLLEGE PARK – Despite a rough first half, the Maryland Terrapins bounced back in the second, scoring 21 points and forcing two turnovers to earn a 31-24 home victory over Northwestern Saturday to become bowl eligible for the second consecutive year.

“I’m proud of the way this team continues to show the culture, the ability, battling back once again,” said Maryland head coach Michael Locksley. “I’m really proud of them in terms of the type of culture we’ve developed on the side of that locker room.”

Maryland entered homecoming weekend with quarterback Taulia Tagovailoa out with a knee injury, placing backup Billy Edwards Jr. as the starter against Northwestern. In his first career start, Edwards went 18 of 28 for 166 passing yards and one touchdown,

The former Lake Braddock star said he learned he was starting on Wednesday.

“Definitely some nerves throughout the week,” said Edwards. “Obviously, a lot more distractions that came my way. But I tried to keep the same mindset I had the whole year and just prepare the right way.”

“We knew that running the ball was going to be very important to getting the win,” said Hemby. “We came through when we needed the most down the homecoming stretch.”

However, Northwestern got on the board first in the first quarter, as Brendan Sullivan ran a quarterback sneak into the end zone for the touchdown. Maryland responded to tie the game when Hemby scored his first of three touchdowns on a 14-yard scamper, which capped off a 12-play, 87-yard drive.

The Wildcats then added a field goal and a touchdown to extend the lead to 17-7 late in the half.

Maryland drove deep into the red zone on their last offensive drive of the half but was held to a field goal, entering halftime with a 7-point deficit.

At the beginning of the second half, a Dante Trader Jr. interception led to Hemby scoring his second touchdown from 18 yards to tie the game up at 17-17.

Maryland then took a 24-17 lead late in the third when Edwards connected with Rakim Jarrett for a 30-yard score.

However, a missed field goal attempt from Chad Ryland gave Northwestern a chance to tie it back up, as Andrew Clair found the end zone for a 9-yard touchdown.

But on the first play of Maryland’s next drive, Hemby raced past the defense and down the sideline for a 75-yard score to give the home team the lead with over three minutes left.

“It’s a simple play that we worked on all week in practice,” said Hemby. “It was a perfect time to run it in the game. I just had to run and beat two people, and I was able to outrun their angles that they had on me to score a touchdown.”

The Wildcats attempted to tie it back up again, but Sullivan threw a deep pass that Beau Brade intercepted.

Next up, the Terps enter their bye week for the last weekend of October but will be back in action at Wisconsin on Nov. 5.