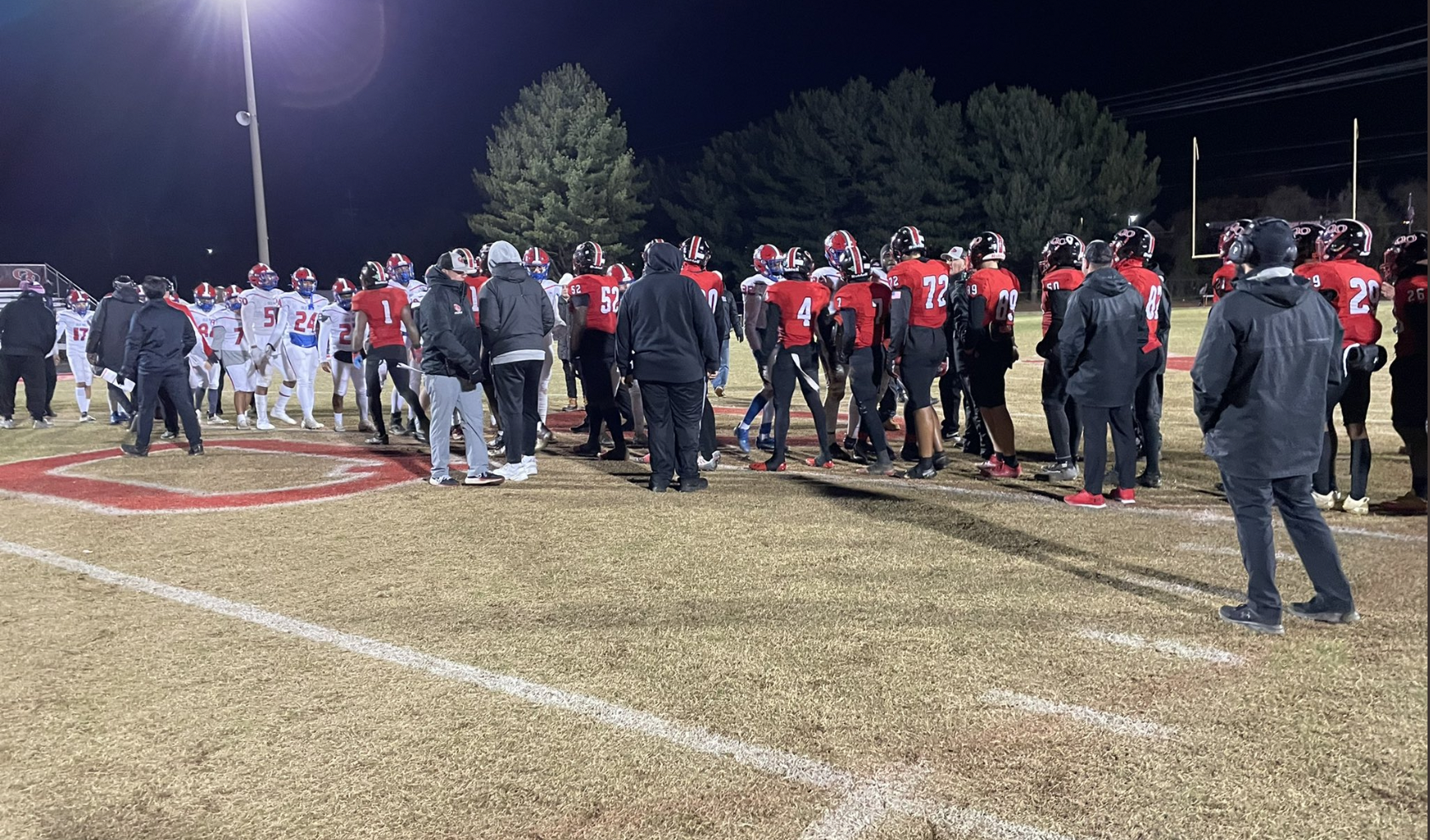 GAITHERSBURG – The Quince Orchard High School football team once again reached the state quarterfinals, as the No. 2-seeded Cougars defeated No. 7 seed Old Mill 21-6 Friday night at the Cougar Dome.

With the win, the Cougars host Broadneck in the state semifinals on Friday, Nov. 25. While the Patriots kept the game close, Quince Orchard head coach John Kelley said the game “wasn’t pretty, but a win’s a win.”

The Cougars struck first on a chip shot field goal by kicker Evan Church, which capped off a 90-yard offensive drive. Quince Orchard’s offense was able to run the ball well throughout the game, especially with the use of running back Iverson Howard.

“I thought we were able to run the ball with our success,” said Kelley. “But we didn’t finish our drives early on in the game. Besides that, there’s some good stuff that we did.”

Quince Orchard capped off an early second-quarter drive with another field goal by Church to establish a 6-point lead.

On Old Mill’s ensuing drive, the offense ran a trick play with wide receiver Shyheim Eagleton passing the ball, but his pass was intercepted by Quince Orchard defensive back Elisha West.

“We executed very well on defense,” said West. “We weren’t cooking on offense at first, but we ended up getting the job done, and it was just a great game overall.”

The Cougars capitalized on the turnover with a huge pass from Savan Briggs to Zach Zarchin, which set up a six-yard touchdown run by Howard to make it 14-0 before halftime.

“It feels great to move on to another round,” said Briggs. “Get this out of the way, focus on our next challenge trying to get to states.”

Quince Orchard scored again midway through the third quarter, as wide receiver Kendall Johnson scored on a 7-yard touchdown run off a jet sweep, extending the shutout lead to 21.

“Once you get the juices flowing and running and stuff like that, it wasn’t feeling cold,” said Briggs. “It was fine.”

Meanwhile, on defense, Quince Orchard’s defense continued to make critical plays in the second half, as Elisha West and his brother Aydan West both collected an interception, combining for three team interceptions on the night.

“I love playing beside my brother,” said Elisha West. “It’s been a dream for my whole life.”

The Patriots’ only score came late when quarterback Trey Martini’s deep pass bounced off the hands of a Cougars defender and into wide receiver Demetrius Simmons’ hands for a 52-yard touchdown.

However, the late rally was not enough to stop the Cougars’ push toward a repeat state title.

“It’s always awesome to practice on Thanksgiving Day,” said Kelley. “We’ve practiced since January getting ready for this stuff, so practicing on Thanksgiving is always special.”