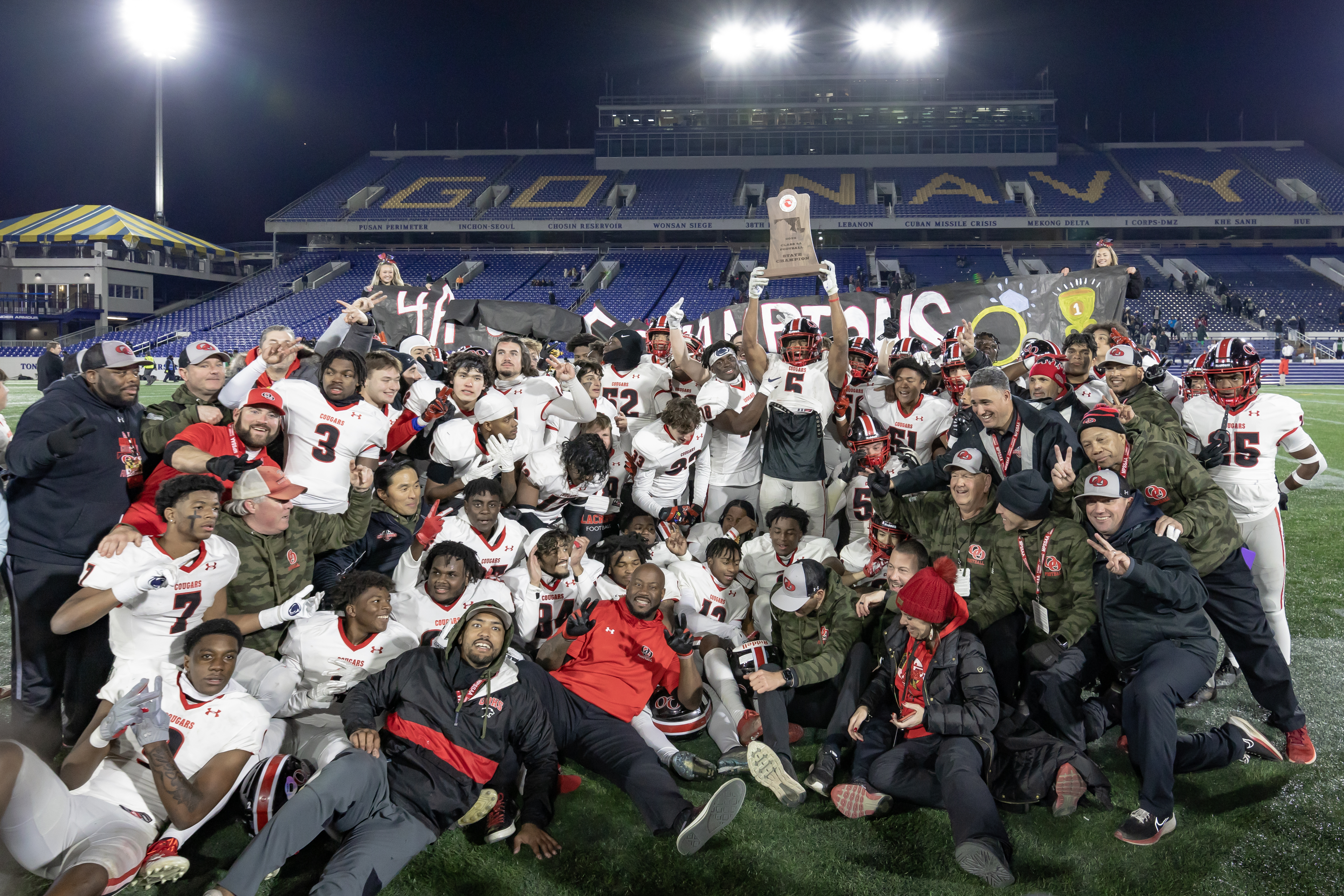 Both teams competed in a tight affair until the fourth quarter, when the Montgomery County-based squad went on an offensive blitz, scoring 22 unanswered points as the Cougars won its second straight state title with a 32-7 victory.

It is Quince Orchard’s third championship in four seasons under head coach John Kelley, who also won his 100th career game. Yet, despite all the accomplishments, the result did not feel any different to him.

“It still feels great,” said Kelley. “All the credit goes to the kids, and how they played, our assistant coaches for getting these guys ready to play.”

Cougars running back Iverson Howard was the MVP of the game, as he finished with 27 carries for 191 rushing yards and two touchdowns.

Howard’s first touchdown was a one-yard score that capped off a 10-play, 76-yard drive with 5:14 in the first quarter.

“I’ve been working hard all offseason,” said Howard. “I’ve been hitting the weight room. I definitely got bigger, so I had to keep pushing, and it takes a lot of heart.”

However, on Flowers’ ensuing drive, quarterback Sean Johnson connected with Matthew Ogunniyi for a 56-yard score to tie the game up at 7-7.

The next score came with under 10 seconds left in the first half when Quince Orchard kicker Evan Church made a 26-yard field goal to put his team up 10-7 at halftime.

“We just had to show to them that we wanted to strike first,” said Cougars linebacker Matthieu Longa. “We showed them that we’re here for that dog fight, and we weren’t going to back down.”

Neither team was able to score in the third quarter, as both defenses stepped up and made plays.

However, early in the fourth quarter, Sean Johnson was sacked and stripped of the ball by Jalen Harvey, with the ball being recovered by Kendall Johnson in the end zone for a defensive touchdown for Quince Orchard.

“My high school career, all I dreamed about was playing for a two-time state championship,” said Johnson. “When I saw the ball, I saw that in my hands, and I really was chasing it.”

The Cougars’ defensive unit came through again and blocked a punt, knocking the ball out of the back of the end zone for a safety, making it 19-7.

It led to another Howard touchdown on Quince Orchard’s ensuing drive, as his two-yard run into the end zone extended the lead to 26-7 midway through the fourth quarter.

Cougars quarterback Savan Briggs scored the game’s final touchdown on a one-yard sneak into the end zone. Briggs finished 9 of 11 for 84 passing yards.

For many seniors, including Briggs, Johnson and Longa, winning in their final game as a Cougar is a satisfying feeling.

“It feels amazing to go out on top,” said Briggs. “It hasn’t hit me yet that it was our last game, and we’re not going back to practice and to have another game.”

In the end, the Cougars’ offense racked up 310 total yards, while the defense held the Jaguars to 163 offensive yards.

“I want to give some credit to Flowers and Coach [Dameon] Powell,” said Kelley. “They had a phenomenal season. One of the best in the school’s history.”