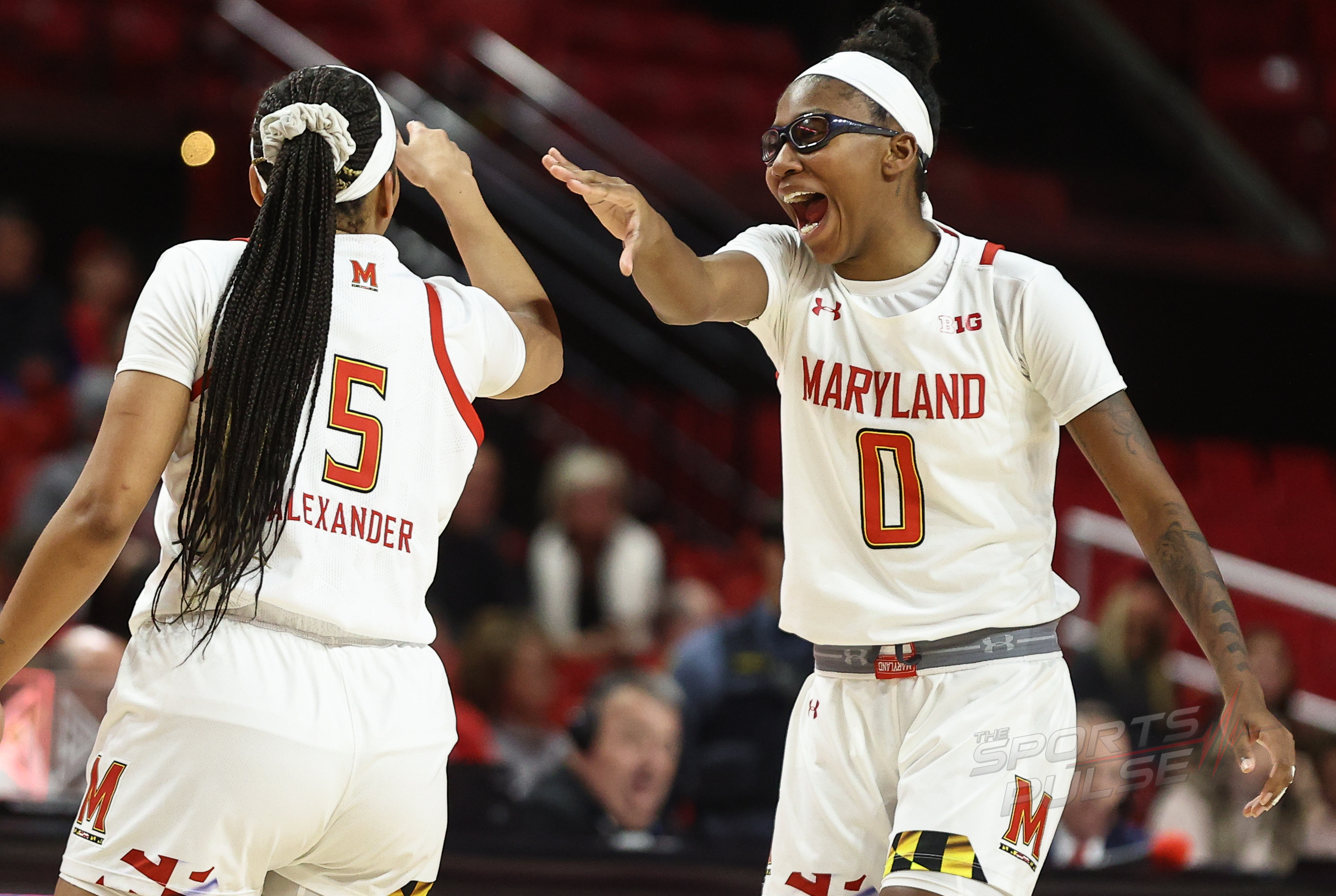 By Brandon Alter for The Sports Pulse

The Maryland women’s basketball team held a four-point lead entering the final four minutes in the fourth quarter against No. 6 UConn Sunday afternoon. Senior guard Brinae Alexander fired off her third 3-pointer of the game, giving the Terps a seven-point edge.

Timely shots from behind the arc like Alexander’s helped No. 20 Maryland (9-3, 1-1 Big Ten) hang on for an 85-78 win, earning its first win over UConn in program history.

“Really incredible, special win,” Terrapin’s head coach Brenda Frese said. “Like I told them in the locker room, I’ve done a lot of firsts here, but first time being able to have a team beat UConn, [I] definitely will remember win 601 because of this group.”

During his postgame comments, UConn head coach Geno Auriemma admitted that his game plan was to allow Maryland to take as many 3-pointers as they wanted, but the late ones that went in were the difference.

The Terrapins’ upset victory also required a late run by the home side.

After entering the third quarter trailing, UConn tied the game at 62 early in the fourth. Maryland responded with an 8-0 run to take a 70-62 lead.

“I love the fact that we never wavered,” Frese said.

It wasn’t the first time Maryland wrestled off a Huskies’ lead. Midway through the second quarter, consecutive 3-pointers from Abby Meyers and Shyanne Sellers capped off an 8-0 run to give the Terps a 27-23 advantage.

The Huskies were able to tie the game on several occasions, but they could not wrestle back the lead.

“Shy definitely broke the ice with the threes with that one beforehand,” Meyers said. “I just appreciate my teammates looking for me in transition. I’m gonna keep running and keep running wide and looking for the open shot.”

The pair of threes were part of a massive second quarter for Maryland, led by Meyers. The senior guard scored 11 straight points to give the Terps a 35-30 lead.

Meyers finished with 16 points in the second frame, helping the Terps outscore the Huskies 28-7, giving the home side a 43-36 lead at the break. Sellers ended the night with 19, and Diamond Miller was the third-leading scorer for the Terps with 17. Sellers also led the team with six assists, while Miller and Meyers split the rebounding lead with six apiece.

“I have a great coaching staff that’s always in my ear,” Sellers said when asked how she’s established herself as a scorer. “Being aggressive and just making sure I’m taking the right shots.”

Maryland didn’t have lights out shooting for the full 40 minutes.

Frese had to call an early timeout with the Huskies up 15-7. The Terps had missed six of their first seven shots at the time. After the first quarter, Maryland was just 6 of 20 from the field and trailed by four.

Turnovers helped propel the Terps to the upset, forcing the Huskies over 22 times while committing just five themselves.

Frese credits her team’s execution of the game plan defensively for the turnovers.

“[We were] able to adapt. We kept changing triangle one, triangle two; we pressed full court. We went man; we went zone,” Frese said. “So there are a lot of counterpunches within that game.”

While the win will go down in history as the first against the Huskies, Maryland knows there is still work to be done and a tough conference schedule ahead that features six games against ranked opponents, including traveling to No. 4 Indiana and a pair against No. 3 Ohio State.

“We just have to continue to be consistent, find that consistency and grow together because it’s a long season, and the Big Ten is not easy at all,” Meyers said. “We’re gonna still have our fair share fights down the road, and we’re gonna enjoy this win and all that it has to offer, but I think that come practice on Wednesday, we got to get back to it.”