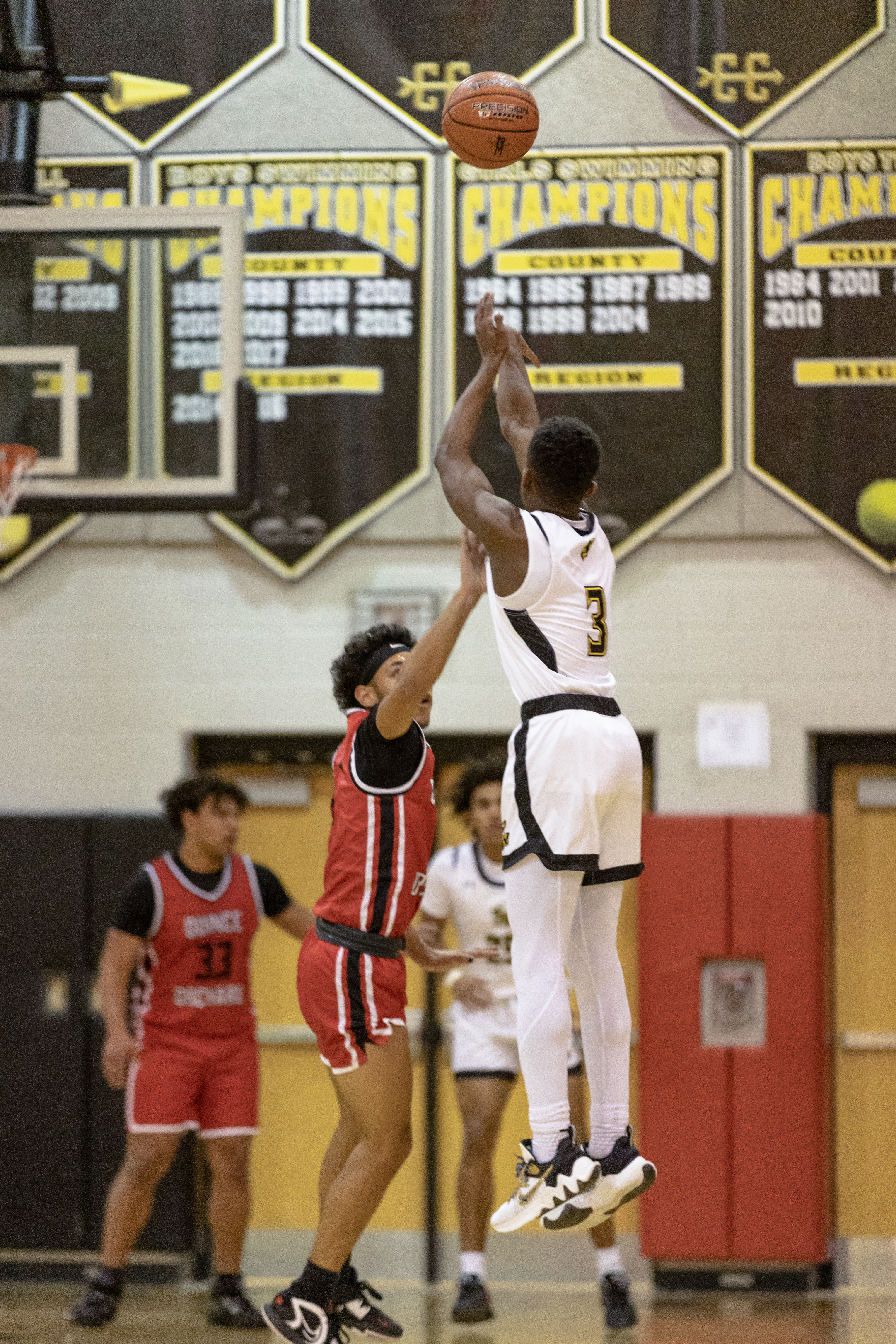 The Rockets dominated the home affair, earning a 67-36 victory over the Cougars.

“While the score might have looked big, that’s a very physical team in QO,” said Richard Montgomery head coach David Breslaw. “They’re coming off their football season, so they’re just getting used to basketball.”

Donte Mayo Jr. stepped up big time for the Rockets as he finished the night with 28 total points, including six 3-pointers.

“We started off a little slow,” said Mayo. “But we got it together in the second half, and we were able to pull away from a good team.”

Richard Montgomery jumped out to an early 12-2 lead and led by seven points by the end of the first quarter, as the Rockets showed aggressive play on both sides of the court.

Mayo was a vital part of the Rockets’ dominant first half, as he dropped seven points in the first quarter, while five more points in the second gave him 12 points to finish the half.

“I feel like I was setting my feet,” said Mayo. “My teammates were getting me open, moving the ball so I could get open shots.”

The Rockets continued moving and shooting the ball effectively, taking a 30-17 lead at halftime.

The third quarter was Mayo’s best period, as he scored 14 points, including four buckets from behind the arc.

“It’s kind of what we expect out of him,” said Breslaw. “No shock there. He was our leading scorer last year as a sophomore.”

The Rockets added 14 more total points in the fourth quarter, with Mayo knocking down another bucket to close the night. Richard Montgomery’s Khalil Wilson added seven points in the victory.

“QO was a very tough team,” said Rockets player De’marean Frazier. “I think we just needed to prep for their press…because it was tough against Rockville.”

The Rockets are coming off a close 63-60 loss to Walter Johnson in last season’s playoffs. However, multiple players said they hope to make another postseason run in 2023.

“I feel that we can be really good,” said Mayo. “As long as we stay disciplined, and stick to our principles and values, then we can go really far.”

Meanwhile, Quince Orchard is rebuilding, with Mac Minturn entering his first season as head coach. Against Richard Montgomery, D.J. Abegesah was the leading scorer for the Cougars with 13 points, while Savan Briggs and Donovan Hunt each had eight points.

“I enjoy the guys on our team,” said Minturn. “They’re working hard; they’re positive. If they keep that attitude up, we’re going to get there eventually. We’ve just got to keep at it.”