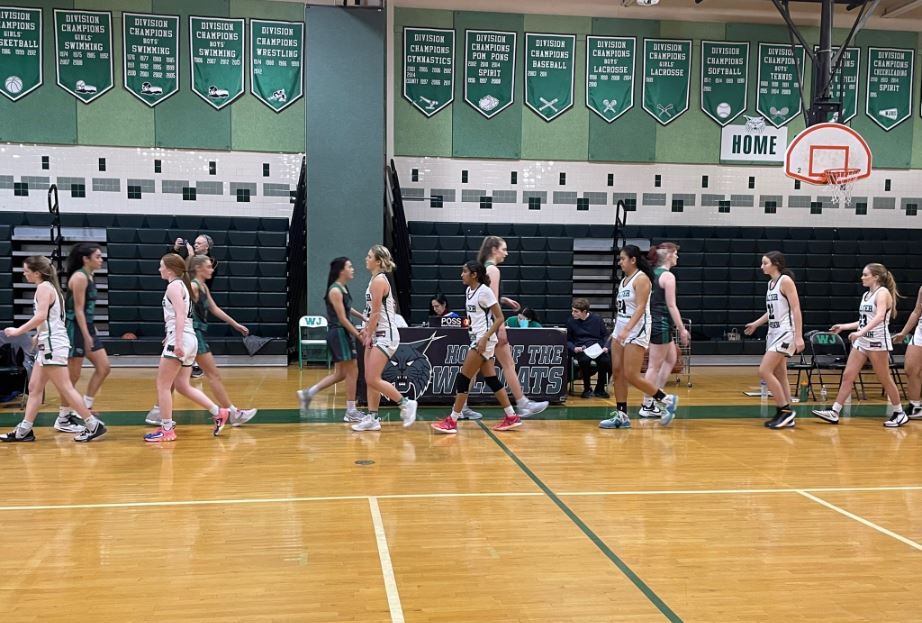 The Bulldogs then faced a tough Walter Johnson squad on Dec. 19, and while the first three quarters were competitive, Churchill soon took over in the fourth quarter en route to a 56-41 victory to improve to 6-0 heading into winter break.

“They just started playing the way they normally play,” said Bulldogs head coach Pete McMahon. “We just told them at halftime to stay relaxed, play their game, and come out firing in the second half.”

Chelsea Calkins led the way for Churchill with 19 points, including 13 in the second half.

In addition, Elise Huang finished with 12 points on the evening, while Dillan George dropped 10 points.

“This is the most I’ve scored all season,” said Huang. “I’m really thankful for all the help I’ve had from my coaches and my teammates.”

The Bulldogs jumped out to a slim four-point lead at the end of the first quarter as Calkins scored six points.

“We just had some nice shots,” said Calkins. “Our defense picked up. We just came together as a team.”

The game turned into a back-and-forth affair, as both teams showed solid shooting and defense.

Walter Johnson knocked down buckets thanks to players like Katie Martin and Norah Youssef.

Martin knocked down two 3-pointers in the second quarter, as the home team led Churchill 23-18 at halftime. She finished as the leading scorer for the Wildcats with 11 points.

“They did everything we asked them to do,” said Walter Johnson head coach Christopher Donlon. “We had a game plan coming in. I think we executed for the most part.”

The competitive affair continued in the third quarter, but the Bulldogs ended the period regaining a three-point advantage. Dillan George knocked down three buckets for six points in the quarter.

“We weren’t playing really well in the first half, but we really brought it together,” said Huang. “We started playing as a team, and it just all started clicking. I’m really proud of what we accomplished.”

The fourth quarter is when the momentum completely swung Churchill’s way, as they went on to outscore the Wildcats 23-11.

“It just shows that all the dedication we put into preseason and during the season,” said Huang. “It’s nice to see every person participating and doing their part and making this team so great.”

Calkins added more to her incredible performance with 10 points, including two made 3-point shots.

Other Churchill players like Huang, George, and Miranda Hill also contributed to the dominant fourth quarter with their own field goals and free throws.

“We look at it as an entire team,” said McMahon. “The team plays really great. They look out for each other. Tonight, we had Dillan in foul trouble, so Chelsea and Elise picked up.”