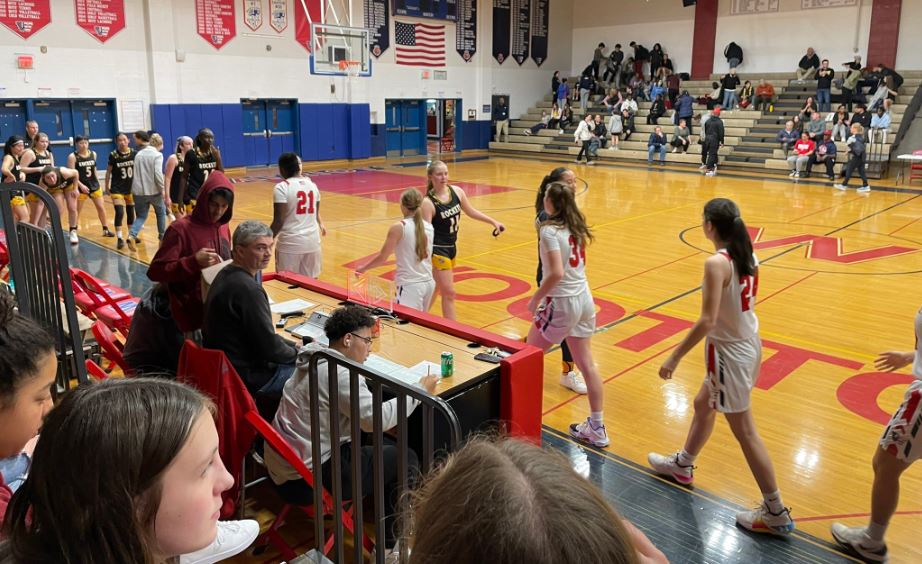 The Patriots hosted Richard Montgomery, and while the first half was close, Wootton took full advantage in the second half to earn a 54-43 win.

“I thought the girls played really, really well against a very good Richard Montgomery team,” said Patriots head coach Maggie Dyer. “I thought we really came alive at the end of the third quarter and finished really strong in the fourth.”

Dyer has been Wootton’s head coach for 20 years, as her main goal has always been to bring the team a regional championship.

“Obviously, this is a group that I think can do it,” said Dyer. “I’ve got a lot of faith in this group.”

Senior Amaris Palanga finished the night as the Patriots’ leading scorer with 20 points, including 12 in the second half. All of Palanga’s points came on 10 buckets.

“Amaris just works so hard and does so much for our program,” said Dyer. “Not just in scoring, but in rebounding and all the little things she does physically.”

“As a team, we worked really hard together,” she said. “We come into the game knowing what to do to win. We talk and communicate, and that’s what got us the win.”

“Katie, McKenzie, and Emma have been fantastic performers for us all year,” said Rockets head coach Michael Oakes. “We’re really excited about being in such a great division and playing great teams like Wootton.”

The Patriots finished the first squeaking by with a 2-point lead.

“It feels really good,” said Palanga. “I attacked the basket a lot more. It felt great to make baskets, look for my teammates, and see what was open.”

The game continued to be a competitive affair in the second quarter as Museles knocked down a couple of 3-pointers while Diao made a few shots. Wootton led 31-27 at halftime.

All the momentum shifts to Wootton at the start of the second half. Palanga added eight more points in the third quarter and four more in the fourth. She credited the Patriots’ teamwork for their success.

“Our passes were falling and moving, and everyone was open,” said Palanga.

Museles also made two more shots from 3-point range to seal it in the fourth quarter.

“With the win, it helps to know that I was able to help the team win,” said Museles.

Meanwhile, Richard Montgomery drops to 6-4 on the season after getting huge wins over Churchill and Walter Johnson.

“Tonight, things didn’t go our way, but I think it’s just credit to Wootton,” said Oakes. “Both teams played very hard, executed, and got some timely baskets when they needed it.”